April 08, 2008
My second lazy recipe in a row. Guess just the mood I am in! I’d copied this lazy pastry recipe from a cookbook many years ago, so just decided to finally try it. To make the pastry, mix together 1 cup flour, 1 tbsp caster sugar and a pinch of ground cinnamon. Rub in 75 gms butter until the whole mixture resembles breadcrumbs. The recipe says to add an egg yolk now, but I just used some water to bring the dough together. Knead it until smooth. 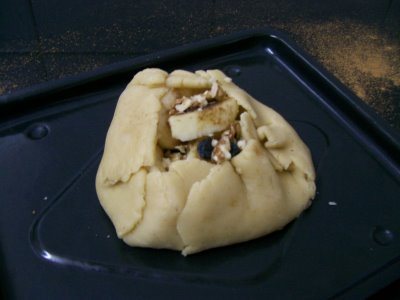 Roll out the dough as thin as you can, then transfer to a baking sheet. Now peel and thinly slice an apple. Toss it in lemon juice. Make a layer of apples in the center of the pastry leaving 2-3 inches all round. Sprinkle some raisins and ½ tsp demarara sugar. Add another layer of apples, then raisins and sugar again. I added a third layer and then my apple was all used up. Top with some more raisins and sugar as well as some chopped walnuts. Bring the pastry up to cover most of the apples (you will probably have a hole in the middle; cover it with foil to stop the fruits burning)

Preheat the over to 200C. Bake the lazy pie until its golden, about 40 minutes. I cut it into slices while warm. My verdict : the pastry was crisp, but I would have liked it to be less biscuity. The filling : sweet, nutty, fruity simply couldn’t have been better. 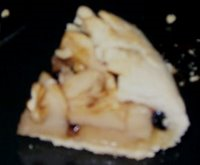 Anonymous said…
The filling sounds so good my tummy is grumbling after reading this. Cooks Illustrated has a great recipe for rustic apple tarts. The crust would work great with your filling.
April 28, 2008 at 9:51 AM