January 14, 2014
Today is a day of many festivals. Maghi in the north, makar sankranti in Western India and pongal in southern regions, the day variously marks harvest, new year and start of an auspicious time. My favourite festival though happens a day before January 14. On lohri day, my state of Punjab celebrates winter solstice with bonfires and much signing and dancing.

As with all festivals, food forms a major part of lohri. It's traditional to eat peanuts, sesame brittle called rewri and for some strange reason, popcorn, on the day. The same foods are also thrown into the bonfire, an offering to bring in good luck.

There are also sweets, of course. The more popular one is bhugga, made of condensed milk and sesame seeds, bringing in warmth in the cold months. But it's this lesser known sweet that I wanted to tell you about. 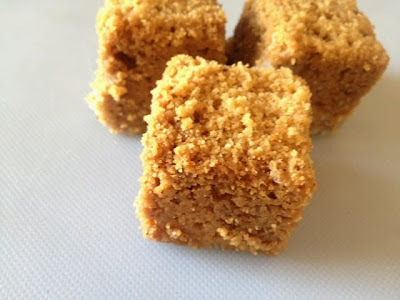 This sweet springs up at all sweet shops in Amritsar the first week of January. It's called khajoor, the same name as dates. And yet, the sinful treat has nothing healthy or date like going for it. This is instead, a dough ball made of sugar and flour and ghee. Then deep fried in more ghee so the outside becomes crisp and crumbly while the inside is soft, white and truly rich and delicious. I have memories of khajoors eaten just a short while out of the frying pan, still warm and oozing ghee. Then, just like magic, they vanish a day later, not to be seen for another year.