Cute as a Button 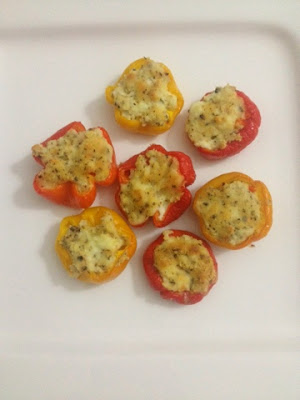 I am not a big fan of peppers. But walking down the vegetable market last week, I saw this guy with a basket full of small chilli peppers. On second glance, they turned out to be not chillies but miniature versions of bell peppers. And they looked too cute to pass up so I bought myself a mixed bag of red and yellow peppers. Without any idea whatsoever on what to make of them.


Since the peppers were really tiny, I thought I'd keep them whole and bake them. So first off, I washed the peppers and cut the tops off. Using a small knife, I removed the seeds and hollowed out the peppers. I then brushed the outside of the peppers with olive oil. Next up - the stuffing. It's made by mixing up 1/4 cup paneer (you can also use ricotta) and 1/4 cup grated cheddar. To the cheese mix, I added fresh ground pepper and a generous helping of dry oregano. You should check the mix at this stage to see if it needs any salt. You will need only a tiny amount of filling for each pepper - use a small spoon to press it in to make sure if reaches all the little nooks and cranies.


I arranged the stuffed peppers on a non-stick baking sheet and let bake at 200C until the peppers were soft and the cheese was all melted and gooey. They make a great appetizer but be careful when eating them straight off the oven - best to let them cool off a bit first!