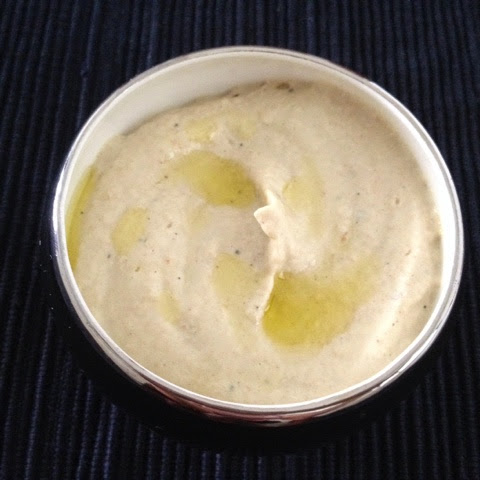 I have an almost automatic reaction to the word eggplant. Blame it on mushy baingan curries I saw growing up, but ask me if I want to eat a dish with eggplant and I won't even think a minute before I say no. The only exception to this rule, thus far, is the baingan bhartha. The smoky mashed eggplant curry filled with fried onions and tomatoes and garam masala has always been the solitary eggplant favourite of mine.

Now, it is time to add a second. I think it has got to do with smoking the eggplant but I instantly fell in love with baba ghanoush. Well, not maybe not instantly - I can remember many a middle eastern mezze platters where I inhaled all the hummus and tzatziki and let my friends finish the baba ghanoush. But I tried making it at home for the first time last week and I totally loved it. I think it helps that the recipe, texture and flavours are so close to my other favourite dip: hummus.

So whether you are an old baba ghanoush fan or have never tried it before, here's the super easy recipe for you to make. Take a medium sized eggplant, wash it and stab it a few times with a knife. Then pop the eggplant directly on the open flame on the gas stove. Keep the flame medium to low and turn every few minutes until the eggplant is charred and black all over. Let it cool, then peel the eggplant. Cut off the top (the crown) of the eggplant, separate the quarters and remove any large chunks of seeds that you spot. I must tell you that this 'removing the seeds' step is completely optional and only comes from my years of making baingan bhartha. Stack a strainer over a bowl. Put the now peeled and deseeded eggplant on the strainer and let it stay there for an hour or so until all the moisture drains off.

Put the eggplant in a blender alongwith the following ingredients for the dip:
- Tahini: opinions differ on whether tahini belongs in a baba ghanoush but I like the hummus like quality it gives the dip. Use 2 tbsp. for each eggplant
- Garlic: 1-2 cloves per eggplant. Peel and mince the garlic before adding it to the blender
- Lime: Juice of one lime (about a tbsp.) per eggplant
- Salt: Add 1/4-1/2 tsp to begin with. You can always adjust this later.
- Olive Oil: I used about 1/2 tbsp. but even upto a tbsp. is fine,

You need the run the blender for just a few seconds until everything gets mixed in and becomes a smooth, fluffy paste. Check the flavour and add more tahini/lemon/salt if you need to. Move the dip to a bowl and top with a swirl of olive oil. If you want to add a dash of colour, you can sprinkle some chilli powder or sumac on top of the bowl too. Serve alongside toasted bread. I know pita is traditional but I don't have it always and I eat baba ghanoush (as well as hummus) with everything from baguettes to multigrain toasts.