March 03, 2015
I remember the first time I met another food blogger. After months of back and forth over emails and commenting on each other's blogs, Harini, Alka and I landed up at Bandra's Carter Road on a mildly cold afternoon in December 2008. Sitting on a bench on the promenade, Alka unwrapped her box of koki. I passed around cookies I had baked for them to take home, and Harini brought out a vegan cake she had baked just that morning. We chatted for hours, feeling that we already knew the other two from their blogs and when the bill finally arrived at Cafe Coffee Day, each of us fought to pay but ended up sharing it.

Fast forward seven years. Bombay's food blogging scene is buzzing and there must be at least a hundred blogs being written from the city. A lot of these bloggers only write reviews so restaurants have jumped onto the bandwagon. I must admit I quite like the excitement of being invited to launches and menu previews, specially because you get to meet the chefs as well as fellow foodies. Sometimes the event that follows is amazingly good; many other times the food is a let down so I've become quite picky about which invites I accept. From past experience, I know that JW Marriott always put on a good show and so it was with great expectations that I accepted the invite to go to the Spices restaurant at Juhu's Marriott.

The occasion was a new dimsum menu being launched by Chef Tenzin KheChok, the latest addition to the chef lineup at the hotel. When we got there, the chef was in the kitchen making the dimsums himself. But we had the private dining room to ourselves and soon enough, 15 food bloggers showed up. Now here's the thing about there being so many bloggers in the city - every event, there are some familiar faces who I count as good acquaintances, even friends. But more than half the people are new each time, and it's exciting but also a little bit strange meeting folks whose blogs I know nothing about.

Well, with intros out of the way, the steamer baskets of dimsums started to arrive. The chef opened with a mushroom dimsum and over the next hour, some ten other types followed - everything from chicken to prawns to veggies. My personal favourite was an edamame and truffle dimsum shaped like tiny money bags, and I didn't mind the pan fried mixed vegetable version either. The chef also had some interesting takes on the dimsums and there was universal praise for the one where spinach leaves were used as a wrapper. Every basket of dimsums was beautiful, the chef's skills showing in impeccably shaped morsels.

Service though, was a very different ball game. When the first steamer basket arrived, the servers put on their fine dining hats and started serving dimsums around the table. But this was a table of food bloggers and they had a very different idea of how a dinner works. Every blogger on the table wanted to take a picture of the perfectly arranged dimsums and so we patiently waited for 15 pictures to be clicked. Now dimsums being what they are, they turned cold and a little gummy by the time the photo session was over. Of course, this was repeated for every single basket of dimsums coming in, which was hilarious because anyone who had already clicked the picture was clamouring to start eating. A few dimsums later, the service got a little bit smarter and they started to bring in smaller baskets so photos could get taken quicker. But the overall reaction of the servers throughout the meal was bafflement and a lot of confusion.

In the end, the whole experience was like these hot chocolate buns chef Tenzin served us at the end of our dimsum meal. Something new, a little bit exciting but overall, just a tiny bit bizarre. 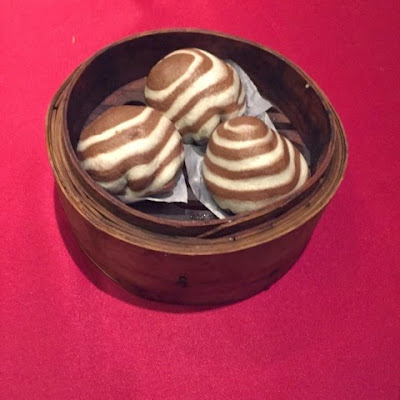 Srivalli said…
Ah, which is why I never do reviews Simmi, it's surely not my cup of tea. We recently went to a restaurant where we pre booked. On knowing we were food bloggers, they politely said no for cameras..:)..anyway in the end they let us click (none of us carried our DSLR) so it was mobile clicks..Nice to see you writing so regularly!
March 6, 2015 at 1:15 PM