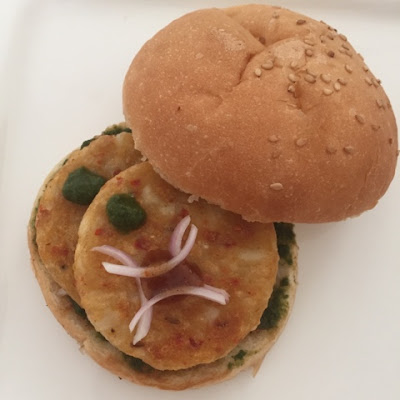 My favourite memories of college are the time spent with my four friends. There were classes of course, but there were also long gossip sessions in the garden. And when we could afford it (not too often at the time), there was food. I recall our college had a juice guy and we went on a juice kick for a while. And then there was the canteen - fairly basic cafe - dishing out coffee and samosas and other fried snacky stuff.

One dish in particular stands out - the band tikki or potato tikki in a bun. This was the precursor to McDonalds aloo tikki burger; a potato patty fried and encased in a burger-like bun, full of spicy chutneys. I was the nerdy type in school and a friend of mine claims she would offer to buy me band tikki after class, so I could bring her up to speed on whatever got taught that day. Fact or not, a mention of band tikki still brings a smile to all our faces.

I make band tikki often. At first, I used to make the potato patty from scratch. But a few months back, I discovered the frozen aloo tikkis. One in particular, from McCain, ticks all the right boxes for its garlicky flavour and right levels of spice so I now have a package always in the freezer, ready to dish out band tikkis when mood or memories strike. Or when I have fresh green chutney. For while everything else in this dish can be bought or is in your pantry, a good green chutney is make or break here.

Heat a frying pan and pop the frozen tikkis on it. If you keep the heat low and give them time to cook, there is no need to defrost first. Turn every minute or so, until the tikkis become soft and feel cooked through. Move the patties to the side of a pan to make some space. Halve the burger bun and heat on both sides on the frying pan until lightly browned and toasty. Spread both the chutney on the lower half of the bun and spread onion slices all over. Top with both the potato patties, add more chutneys and onions and top with the other half of the bun.