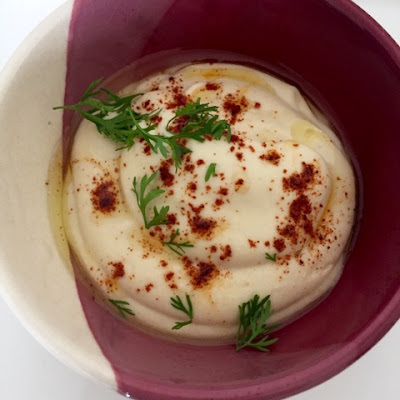 Several times during the making of this hummus, you will doubt yourself. Am I adding too much lemon juice or way too much tahini, you will think. Why is there no olive oil going into the blender. And who puts iced water in a hummus.

But keep aside all your past hummus making experiences and believe in the genius that is Mike Solomonov, the chef who made Zahav the leading voice of Israeli cuisine in US. For only then you get rewarded with a hummus that is as silky smooth as a buttercream, with a texture that feels like you are eating clouds.

In the months following the publishing of Zahav cookbook, the hummus recipe took the world by storm. I noticed it a couple of weeks back on Food52 and was taken in by how counterintuitive everything in that recipe was. This might not be the first hummus recipe on this blog but I am fairly sure that this might be the final one.

Put chickpeas in a large bowl with 1/2 tsp baking soda and cover with plenty of water. Soak overnight and the next morning, drain and rinse under cold water. Put chickpeas in a pressure cooker with 1/2 tsp baking soda and enough water to cover by at least 4 inches. Cook until the chickpeas are completely tender and maybe even a little mushy. Because of the baking soda, this will take less time than you think - took about 3 whistles in mine. You can obviously cook the chickpeas without the pressure cooker in a large pot but it will take around an hour to simmer and get mushy. Drain the chickpeas and keep aside.

Process garlic, lemon juice and salt in a food processor or blender until coarsely pureed. Let sit for 10-15 minutes for the lemon juice to absorb the garlic flavours. Strain the mixture through a fine mesh sieve, pressing to get as much liquid as possible. Return the sieved liquid to the blender. Add tahini and pulse to combine. Add 2 tbsp iced water and blend until the mixture is very smooth, pale, and thick. Add chickpeas and cumin and puree for 1-2 minutes, until the hummus is smooth. Keep blending until the hummus appears very creamy. Taste and adjust the seasoning with more salt, lemon juice or cumin if required.

Serve in a shallow bowl, with a sprinkle of paprika and chopped parsley or cilantro leaves as well as a generous pour of olive oil.