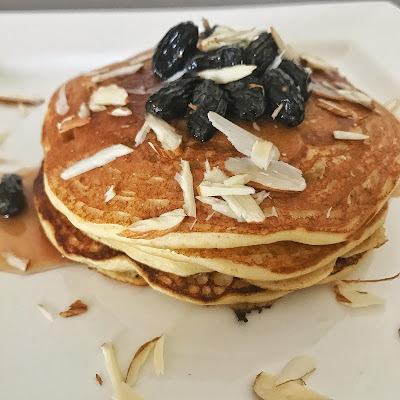 Today is Shrove Tuesday, more commonly known as Pancake Tuesday in some parts of the world. I didn't realise what a big deal pancake day is until I went to London where they have pancake races in the Parliament Square and every restaurant offers a pancake special. Apparently the pancakes are to use up all the butter and other good stuff in the house, this being the last tuesday before Lent begins. Pretty much like my mom's "eat up the eggs beta, it's navaratras from tomorrow".

Now you can easily whip up a pancake batter, pour some syrup on top and you are good to go. But to me, pancakes are like a blank canvas. There are infinite possibilities on what you can do with a pancake batter and there is one variation that's been on mind for a while. So for pancake day this year, we are making peanut butter and jelly pancakes.

What I did was whip up my regular pancake batter, but replacing butter with peanut butter. And a jam syrup. It's all super fun. Just read on for the recipe.

In a bowl, mix together flour, sugar, baking powder and baking soda. In a second bowl, whisk together milk, egg yolk, peanut butter and vanilla essence. The peanut butter will take a bit of patience and the resultant mix will be grainy but that's all right. Pour the liquids over the dry ingredients, add vinegar and whisk until just combined. Finally, add the egg white and stir until it mixes in with the batter. Set aside for 5 minutes.

Heat a non stick pan on low to medium heat and brush with melted butter. Drop 2 tbsp of batter. Wait a couple of minutes for the pancakes to brown, then flip and cook the other side.

While the pancakes are cooking, put the jam (I used apple and cinnamon but any berry flavour will work well too) in a small pan with 1 tsp water. Heat on a low flame until the jam is melted and all syrupy.

Stack the pancakes on a plate. Pour jam syrup on top and sprinkle wine soaked raisins and flaked almonds to finish.