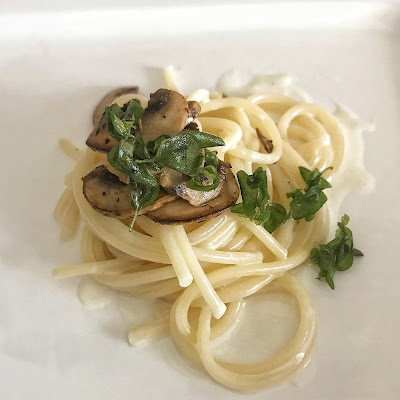 Often times, when brands approach me for a review, it's a process of discovery. But not when Borges asked if I will like to create some recipes with their pasta. Olive oil may seem like a very Indian thing now with hundreds of brands dotting supermarket shelves but there was a time, only a few years ago, when using olive instead of refined oil was a rarity. I recall I started buying this Spanish olive oil back then and pretty much stuck to the brand. And since I had Borges olives and olive oil already in my pantry, this seemed like a good time to give their pasta a try as well.

Borges' pastas are made in Italy with durum wheat, the traditional hard wheat for pastas. I'm starting you off with a cheesy spaghetti but expect a summery penne coming your way soon. Now pastas have become super common on restaurant menus. But often times, they come fully smothered in a heavy white or red or god forbid, pink sauce. They are stodgy and spicy and you may as well be eating curry.

Not this one. For my spaghetti, I made a light yet cheesy bechamel sauce. The creamy pasta is complemented with sauteed mushrooms. And to add another layer of texture, I added some crisp fried oregano leaves at the end. It's all very simple really, just like good pasta should be. The recipe that follows is for one person because I was cooking for myself, so multiply by the number of people you are cooking this for.

We will start with the mushrooms that you should thoroughly wash and slice thinly. Also peel and finely mince the garlic. Heat 1 tbsp oil in a nonstick pan. Add the garlic and let it brown, then add the mushrooms, spreading them out in a single layer if possible. Add vinegar, salt and black pepper. Keep stirring constantly - at some point, the mushrooms will give out a lot of water but it will all evaporate eventually and you will be left with sauteed mushrooms.

While the mushrooms are cooking, fill the largest pot you own halfway with water and set to boil. Once the water comes to a roaring boil, add about a tsp of salt and drop in the spaghetti. Cook for the time indicated on your package, until it's what Italians call al dente i.e. cooked but with a bite. Drain and set aside for a moment.

For the cheese sauce, heat 1 tbsp olive oil in a pan. Add the cornflour and stir until the raw flour smell goes away but don't let the flour get brown. Reduce the heat to minimum possible and slowly add the milk, stirring constantly to avoid lumps. Bring to a boil, then reduce to a simmer and let thicken a bit to the consistency of cream. Add cheese and stir until it all melts into the sauce. Add plenty of black pepper. The cheese will probably give the sauce enough salt but taste and add more if you like.

Finally, heat the remaining 2 tbsp oil in a small pan. Add the oregano leaves. They will splutter and in about 5 seconds, will be crunchy. Turn off the heat and remove the fried leaves with a slotted spoon. Leave on a paper towel to drain off the excess oil.

To serve, add spaghetti to your simmering cheese sauce and let it heat through for about a minute. Pop onto a plate - you can try twirling with a fork but as you can see, I didn't do too neat a job of that. Top with mushrooms and fried oregano.