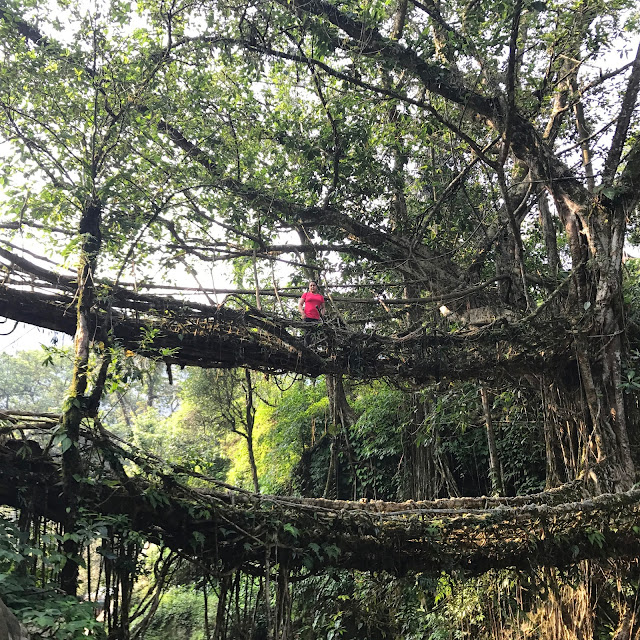 I met Wesley at noon on a sunny day in May at the entrance to Tyrna village. The meeting had been three months in the making. Back in February, I had seen the pictures a friend posted from a trekking trip to Meghalaya. I'd been so taken in by the double decker living roots bridge that I immediately called Chalohoppo, the travel company she had gone with, and booked a trip for myself.

I'm not a trekker which means that instead of the rugged trip my friend had taken, I had arrived at a compromise. We will start the trip with the trek and then spend the rest of our stay in Meghalaya at a nice lakeside resort just outside Shillong. Which means that the day before I met Wesley, I'd landed in Guwahati and been met at the airport by a friendly Chalohoppo driver for a four hour drive to Cherrapunjee.

On arriving at the Sai Mika resort, nestled in the middle of mountains, I called the number I'd been given and was greeted by a friendly, enthusiastic voice of our guide for the trek. Wesley told us that Tyrna village, where the trek will start, was about 45 minutes from the resort, and it was imperative we start by early afternoon so we reach the end of the road before nightfall. At the end of the road was, of course, Nongriat, a tiny Khasi village where the tribals have mastered the art of guiding external roots of a rubberwood tree into a bridge. There are many living roots bridges in Meghalaya but Nongriat has the only double decker one in the whole world.

Well rested and well fed after the overnight stay at Sai Mika, we left our bags in the car and packed tiny backpacks that only contained a change of clothes for the night, raincoats, mosquito repellent and a bottle of water. Wesley lives in Tyrna and was waiting next to the car park. He had a bag too but unlike ours, his carried two life jackets. For the swim at the pond when we reach Nongriat, he said. That sounded promising.

But between the swim in the natural pool that sits at the end of the trek and the starting point in Tyrna, there lay 3700 steps. I don't think I had paid much attention to what the actual trek will entail until this point. I knew soon enough. The 3.5 kilometres trek is mostly a walk down into the valley on a staircase. The steps are steep and narrow and patently dangerous at points. Wesley told us he could make the trek on his own in our hour. But it was with much good humour that he slowed down to match our pace. There is plenty to see on the trail and every few minutes, our guide will point out a rare plant or a group of butterflies. Most points offer a breathtaking view of the valley and the waterfalls that naturally spring up in the place where it rains most of the year. 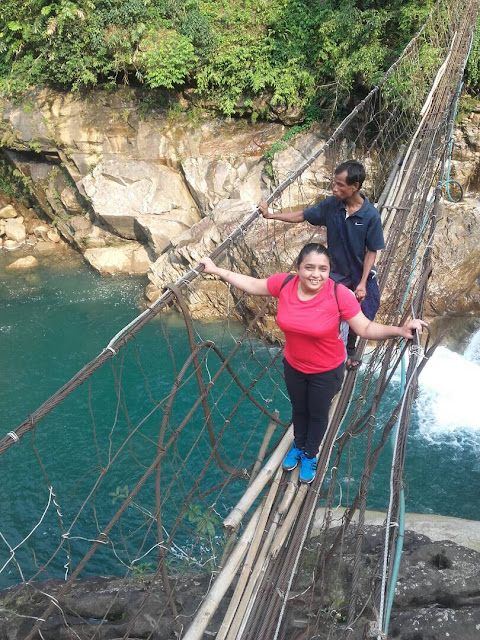 We took two hours to get to the halfway point where most of the steps were behind us. There is some plain walking then and some more steps up and down. But there are also two suspension bridges. I'm reasonably sure they are safe but it doesn't feel like that when you are in the middle of the shaking bridge above roaring water. Wesley sauntered through those and we took small shaky steps and at the end of second bridge came the first view of Nongriat.

It's a tiny village of about 20 households. We had planned to stay overnight at one of the homestays. Don't think of even basic ameneties here. The room had two single beds but instead of matresses, you had the traditional khasi jute bedding. Our room had a bathroom but no running water. We were too tired to care or notice though. Plus as soon as we put our bags in the room, we went over to the waterfall and the pool by the bridge.

Have you heard of fish pedicure that became the rage a few years ago. The fish naturally come to you as soon as you dangle your feet in water at Nongriat. And while people pay good money for it in salons, I had no intention of having fish nibble at my feet. Instead, we spread a towel by the waterfall and ordered tea and chips from the tiny tea stall. We stayed by the water until mosquitoes drove us inside. Our host family had a meal ready and we popped painkillers, mentally scared of the trip back up the next day.

The previous day was hot and sweaty so we left for our trek back early next morning. Somehow, the climb up felt a little bit easier. This time, we stopped far more frequently at the tiny shacks that dot the trail, picking up litchi juice and snacking on maggi. Three hours later, just when I thought I could not walk another step, I climbed up the last rung and into the car park at Tyrna. We clicked a selfie with Wesley, thanked him for all the patience and smiles of the past 24 hours and drove away to the comforts of Shillong.

Some Practical Tips:
1. You can drive to Tyrna from either Cherrapunjee or Shillong. Start early as it gets really hot and sweaty later in the day.

2. It rains most of the year so wear sturdy no-slip shoes and quick dry clothing. Decalthon is a good place to shop for everything you will need.

3. A lot of folks do the trek and back the same day. Don't - it's really nice by the bridge with the waterfall and the pool and it's really not worth the effort if you're gonna start back after an hour.

4. You can do a much longer trek by adding a day to go to Rainbow Falls, but you will need a lot more stamina than I had.

5. Respect the environment. The khasis are really protective of the forests so make sure you don't litter and take all your trash back with you. Also, a lot of plants are considered sacred and it will be wise to ask your guide or a local before plucking a flower or anything of that nature.

6. We were offered a bamboo stick to help with the walking and while I didn't have one on the way down, they are a huge help when climbing up. You can buy them in Tyrna at the start of the trek or at one of the shacks on the way.

7. This is not a competition. Stay hydrated and stop as many times as you want. There are plenty of litchi juice and glucose packs available to buy on the way.

8. Do not forget to carry mosquito repellent, medicines and muscle pain balms/sprays. There are no shops in Nongriat and you can't buy anything critical you are missing.