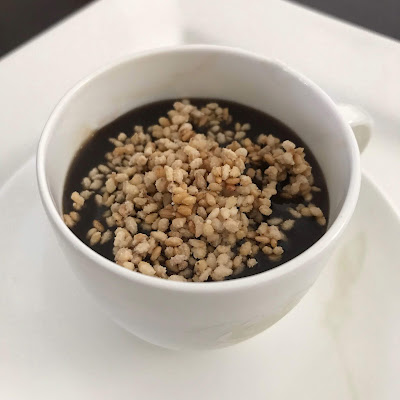 I first heard of Momofuku not in the context of their legendary ramen or fried chicken but because I was intrigued by cereal milk. One of the outposts of the group is Milk Bar where, with Christina Tosi at helm, they dish out desserts that are straight out of a kindergartener's dream. There are many, many good things about Milk Bar but none as good or as intriguing as cereal milk. Think of that little bit of milk that's left at the end of your breakfast, infused with the flavour of cornflakes and sugar that you just ate. That's what cereal milk is, and at Milk Bar they sell whole cartons of it.

Having never had the real thing, I got hold of the Milk Bar cookbook instead and set about making, first, the cereal milk and then a cereal milk panacotta. But because I never do things by halves, I then also made a dark, dark caramel to go with it and some candied sesame seeds I've been thinking about even since I first saw them on food52.

You can make all components a day or two in advance so there isn't much for you to do except eat when the panacotta is set. Also, a word of warning: this is almost too delicate to unmould so if you would like to invert your dessert on a plate and dress it up, use a tad more gelatin.

The recipe follows but before that, here's what a spoonful of goodness looks like. 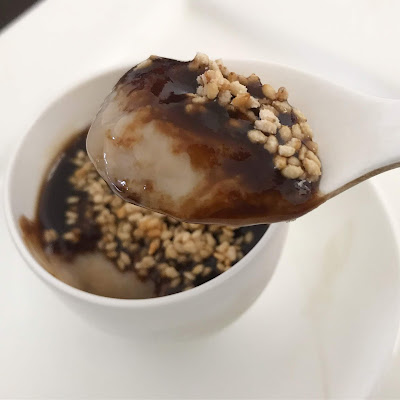 Let's start with cereal milk. Heat the oven to 160C. Spread the cornflakes on a baking sheet and bake for 15 minutes, until lightly toasted. Alternatively, you can pour the cornflakes in a large pan and toast on a low heat, stirring all the time.

Let cool completely, then put in a bowl and pour in 2 cups of cold milk. Stir and leave to steep for 20 minutes. Strain through a fine mesh sieve, pressing to get all the milk out. Whisk the sugar and salt in the milk until fully dissolved. Put it in the fridge to chill. Then drink it, add it to coffee or just make this panacotta.

For the panacotta, bloom the gelatin sheets in a bit of water. Squeeze out the gelatin and add to a bowl. Heat 1/2 cup of cereal milk and whisk it with the gelatin until it all dissolves. Whisk in the rest of the milk, sugar and salt. Pour into shot glasses and let chill for 3-4 hours.

In the meantime, we make the two caramel toppings.

For caramel sauce, mix sugar with vinegar and just enough water in a large pan so it looks like wet sand. Turn on the heat, stir until sugar dissolves and then let it boil until the whole thing is an amber colour. Watch it like a hawk because caramel can go from light to burnt in about a second. Take the pan off the heat and add cream. Stir, then put the pan back on low heat and stir until everything comes together a sauce. This should take less than a minute. Pour into a glass or another heat proof bowl and let cool.

You will notice that my caramel is a lot darker than what you will get. That's because I used brown sugar instead of white but unless you have a way with thermometers or a death wish, I don't recommend it.

For candied sesame seeds, line a baking sheet or a plate with parchment paper. Mix sugar and water in preferably a nonstick pan and bring to boil. Let the syrup cook for a minute until you see bubbles all over the surface, then add the sesame seeds. Keep stirring until the mixture, which starts as a liquid, magically turns to dry crystallised seeds. Pour onto the parchment, spreading into an even layer and let cool. Break up any large clumps when cold and store in an airtight jar. This makes a lot more than you need for this dessert but I've found many other uses for these sesame seeds.

To serve, pour caramel over the panacotta and top with candied sesame.