May 18, 2008
Bhags over at Crazy Curry is celebrating the first anniversary of her blog with an event that's very dear to my heart. Its called This Books Makes me Cook and the idea is to create a dish inspired by a book or a movie.

It's a tough choice. Should I go back to the tea times of Jane Austen and P.G. Wodehouse. Or pick a dish from Vianne's fabulous final dinner in Chocolat. Maybe a recipe from Fannie Flagg's radio shows.

In the end, I decided to make something that would please my favorite detective - Agatha Christie's Hercule Poirot. Order and method are everything to this smart old man with an egg shaped head and a huge moustache. He picked his flat because of its modern square design, and gets vexed even if a single book is out of line in his library.

Hercule Poirot's dream is to see a day when hens lay square eggs. And so many times in his books has he disapproved of a round crumpet or a misshaped loaf of bread. When they started making square crumpets by the time we get to his later novels, his faithful valet George will produce them with regularity for any guests coming to tea.

Square crumpets was what I decided to make in Poirot's honour. The idea was simple. Executing it, however, was akin to a Christie mystery.

Mystery #1 : What is a crumpet? I guess I could have found this out a long time ago, but somehow I didn't. So now I turned to my trusted Larousse and found that a crumpet is "a small spongy yeast cake with holes on the top surface, cooked on a griddle". My further enquiries on the net told me that crumpets are akin to an eggless pancake, usually served with butter at tea time.

Mystery #2 : How do you make it? Here my Larousse failed me as the recipe had egg (didn't everyone else say "eggless"). So I browsed and combined wisdom from some 20-odd recipes for the one below.

Mystery #3 : The equipment - you need a crumpet ring to make a crumpet. Wise cooks told me to substitute a cookie cutter. But who's heard of square cookie cutters. I called up my baking supplies store, and they magically came up with one that's just the right size (3 1/2 inches)

All mysteries solved, making crumpets was a breeze and sort of fun. They are slightly sweet and tasted delicious with butter and with Poirot's favorite hot chocolate instead of tea. 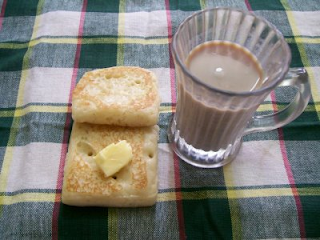 Mix milk and water. Stir in sugar and then sprinkle yeast. Wait for 10 minutes or until the yeast starts bubbling. Mix in the flour and salt. You should have a thick yet pourable batter. If its too thick, add some more warm water and set aside for around half an hour. In this time, it should swell to roughly double the size.

This batter makes four crumpets. My first two burnt because the griddle was too hot, but the next two were perfect.

Thanks Bhags for such a lovely idea. I had so much fun I've decided to continue doing this - pick a book every month and make something inspired from it.

Anonymous said…
This post is so charming as it is, and so wonderfully steeped in the business of writing from a book, that I would almost regret to have it muddied up with extra reference to the tea party. If you find time to make something else that would fit the tea party theme I would love to have you.

but if you dont think you'll have time for another recipe before the deadline, you can go ahead and put the link for skinny gourmet and the tea party into the post and double-submit it.
May 21, 2008 at 2:21 AM

Aparna Balasubramanian said…
Have read a whole lot of Agatha Christie, and this one's a good idea. And now we have a recipe for crumpets. They look interesting.
May 22, 2008 at 9:24 PM

Sunshinemom said…
Poirot is synonymous with petit fours for me - Murder in the Orient Express! Loved your crumpets - I made them recently and dedicated it to Joan and Michael of Mary Poppins!
May 29, 2008 at 10:42 AM

Anonymous said…
- Hi..just came across your blog and got really excited. I've been looking for a food blogger from bombay because i'm a foodie and kinda newish to bombay and a blog like your's is great to read.

- warm crumpets with butter and maple syrup were such a favorite of mine when i was living in melbourne..reading this brought back some memories :)