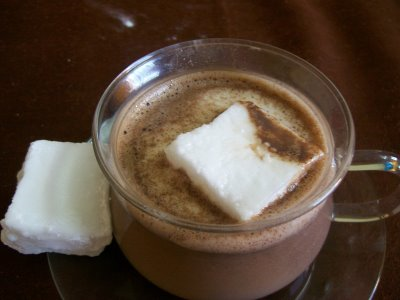 The hot chocolate is the easy bit. I just followed my now-standard recipe but used Hershey's mint chocolate chips instead of the regular dark chocolate. The real excitement was when i decided to make my own marshmallows. This recipe comes straight from Nicole over at bakingbites. I halved it, as I am apt to do with everything. But apart from that, it was just a straightforward recipe. At least at first.

I found a large bowl and soaked 10 gms gelatine in 1/4 cup water for 10 minutes. In the meantime, I mixed 1 cup sugar, 1/3 cup corn syrup and 2 tbsp water in a pan and boiled it for a minute, then poured it on the soaked gelatine and added a pinch of salt and a tsp of vanilla essence.

Next you are supposed to switch on the hand mixer to high and whip the gelatine/sugar mix. This is where the fun begins. Not a single recipe I've read warned me that sparks will fly. And does hot liquid sugar fly! After 3-4 minutes, I swapped into a deeper, much larger bowl. And by the time I finished the suggested 12-minute whipping, every visible surface in my kitchen (including myself) was coated in sticky sugar. But I had a fluffy mixture that I scraped into a clingfilm lined shallow, square dish and covered with more clingfilm to seal.

Because marshmallows are to be left alone to set overnight, I left kitchen in its mess for my maid to clean the next day and ordered myself a pizza.

Once a few gallons of hot water and lot of tedious hard work cleaned my kitchen the next morning, I went in and carefully removed the cover from the marshmallow bowl. I mixed 1/4 cup each of icing sugar and cornflour and sprinkled some of it on a plate. I inverted my marsmallow block on this plate and cut it into square pieces. It's a bit tricky because the sugar sticks but I followed Nicole's tip and dipped my very sharp bread knife in hot water after every cut. Then I picked each marshmallow and dipped it in the sugar and cornflour mix.

Did I tell you already that I halved the recipe? I still have enough marshmallows to drink hot chocolate every day for at least a month. And eat some on the side too!

Sunshinemom said…
Poor lady! I am sure she must have left wondering about the storm in the kitchen:) I am sure the marshmallows were worth it - they do look good:)
February 5, 2009 at 7:41 PM

Anonymous said…
Never knew we get Marshmellows in Mumbai...wooh world is truly globalizing
I only heard these fluffy things in some of cartoons which my kid watch(Oswald )
The PHCWM looks awesome, every bit of worth of all the PAIN u and ur kitchen went thru
May God give more strength and patience to ur maid ...lol
February 5, 2009 at 9:00 PM

Anonymous said…
That sounds like a lovely thing to have, well worth the pain. But how i envy u in having a maid to clean the mess u made LOL
February 6, 2009 at 3:33 AM

Priya Suresh said…
WOwow super, just craving for this hot chocolate:) send me some SImran..love this
February 7, 2009 at 4:44 PM

CurryLeaf said…
They look good and its a perfect cup.I too would like to try my hand at this
February 7, 2009 at 8:14 PM

you come up with posts that reflect most of the food that I like...you just got me craving for that right about now...simple yet very very tempting...
February 8, 2009 at 7:06 PM