A Tale of Two Puddings

February 22, 2009
Life has come a full circle for "This Book Makes Me Cook" in more ways than one. This is the ninth edition of our book club, a number significant because we are nine members around here and all of us have picked our favorites for the group to read at least once in the past months. And for me, there's another reason - my very first entry, before we set up the club, was for the event Bhags ran with the same name. And the big Agatha Christie fan that I am, I chose Hercule Poirot as an inspiration to cook.

We are again reading a Christie this month. The group picked "Adventures of a Christmas Pudding", her collection of six short stories. This is one of Christie's non-murder books. Well, murders do happen, but not in every story. Yet, each of the six stories is totally gripping. Five of six feature the quirky Hercule Poirot, whose passion for order and neatness borders on obsession. And for the final entree, we have Miss Marple, the entirely adorable old lady who is an equally great detective.

I decided to go literally by the book's title this month and make a pudding. Two puddings, actually - Chocolate Pecan Pudding in a square pan for Papa Poirot (God forbid you ever make something round for this man!). And a small round pudding for Aunt Marple. There's another reason for the second one, but we'd get to that. 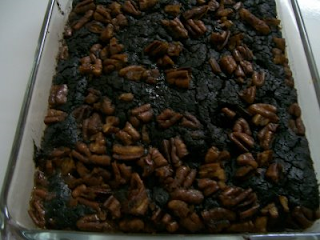 Puddings usually have sauces to go with them. But this one, from a book called "Everyday Chocolate" is self-saucing so you only got to make one easy recipe. Leave 85 grams butter out of the fridge until it softens. Mix 55 grams flour, 1 tsp baking powder, 3 tbsp cocoa powder and a tsp of ground cinammon. Lightly beat butter with 85 grams caster sugar and one egg. Add the flour mixture and beat till the mixture is well blended. Turn into a square dish, keeping aside 3 tbsp of the mix. Sprinkle with 50 grams chopped pecan nuts (again, keep aside a small handful).

Mix 300 grams hot water and a tsp of instant coffee powder to make strong coffee. Stir in 30 grams caster sugar until dissolved. Pour this (except for the last 1/4 cup) over the pudding. This is the step that had me scared. I should have guessed that the coffee is a bigger quantity than all of my ingredients put together, and my pudding will literally drown but I was somehow not prepared for it when it happened. I stuck to the recipe, and put the pudding in an oven heated to 160C and baked it for an hour. And yes, it surfaced again - the cofee, or what was left of it, forming a delicious sauce at the bottom.

Now the pudding for Miss Marple. Use the reserved pudding mix, pecans and coffee to create exactly the same pudding in a small glass bowl. But instead of putting it in the oven, we are going to try and take a shortcut route via a microwave. For the theme for MEC is also Puddings this month, so I thought I'd give it a shot. I first put the pudding in for a minute. It rose quickly but started to bubble and boil over. So I reduced the power to 80%, and cooked it for another 2 minutes in 30 seconds bursts - 30 seconds, pause, 30 seconds and so on. By the end of 3 minute cooking time, the pudding was firm and seemed almost ready. But I gave it another minute in the microwave, this time on 100% power, and it was perfectly done. Was it as good as the one done in the oven? Almost, but not entirely. But then, given the tradeoff between 4 minutes and an hour of cooking time, I think this is the version you are going to see me make more often.

Now to the recipes coming in from the rest of the club:
Sweatha made a Quick Blackberry Tart.
Aparna made a cute Polka Dot Pudding.
And Sunshinemom made a real Christmas Pudding.

For next month, it was my turn to pick the book again. And we are reading Blackberry Wine, my second Joanne Harris for the club (I picked Chocolat the first time round). If you would like to join us, leave a comment here and I will get back to you with details.

jayasree said…
Choco pudding with pecans sounds interesting. Thanks for trying it in MW and sending it to the event.

Sunshinemom said…
I did the same too when I made the chocolate pudding. Put one glass in the mw but the texture was less that what I would like to offer a guest, so just let it go. I guess it is a compromise, esp. after eating the first one! Yours looks absolutely gooey and scrumptious!
February 22, 2009 at 3:50 PM

Siri said…
Wow, now I know what I missed last month. the pudding looks so interesting Simran. I started reading Blackberry Wine just today and its intriguing!. :) Thanks for choosing such a lovely book!

Bharti said…
Oh..it's been so long since read an Agatha Christie. You made me want to read an AG and eat your yummy pudding at the same time.
February 24, 2009 at 2:03 AM

Aparna said…
Looks great, Simran. Where do you get pecans in India? Or did you pick it up from abroad?
I shall hopefully be able to do a belated pudding post.:)
February 24, 2009 at 1:30 PM