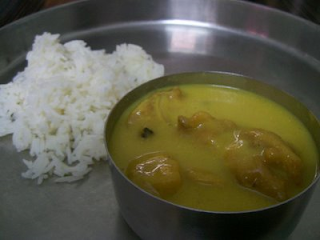 I just can't think of what to write today. That's what my absolute favorite meal does to me, I just want to stop talking and dig right in. So I won't ramble and go straight on the recipe for kadhi.

First, make the pakoras that would go in the kadhi. Slice an onion lengthwise. Make a batter with 1/2 cup chickpea flour (besan), salt, red chilli powder and water. Dip onions in this batter and deep fry until crisp. Keep aside.

Now blend 1 cup yogurt and 1/3 cup besan into a paste. Add 3-4 cups water to make a very thin blend. Heat a tbsp of oil in a pan. Add a tsp each of mustard seeds, cumin seeds, ajwain (carom seeds) and methre (fenugreek seeds). Let splutter for a few seconds. Now add a large onion, cut lengthwise into thin slices and cook until browned lightly. Pour in the yogurt/besan mix and add 1 tsp turmeric powder, 1 tsp salt and 1/2 tsp red chilli powder. Bring to a boil, reduce the heat and let simmer for at least half an hour. You have to stir this occasionally but apart from this you can leave the kadhi pretty much on its own.

The kadhi has to be fairly thick - if you've had a thin, watery kadhi before that was the Gujarati version. This one's the hearty Punjabi one, so just before you take it off the stove add the reserved pakoras and bring to a boil. Add 1/2 tsp of garam masala to up the spiciness and a tsp of amchur (dried mango powder) to add the tangy flavor.

What are you waiting for now; go right ahead and eat with plain rice. And because it's impossible to make kadhi in small quantities (or so my mom says), you will end up having leftovers for dinner. I'm having mine with roti and plenty of ghee tonight!

Mrs.Kannan said…
I never tasted Kadhi,But by the look of yours i should test and taste some.it looks awesome
September 13, 2008 at 6:16 PM

Srikitchen said…
that looks inviting! new recipe for me! come and join in the chicken event going in my blog!
September 16, 2008 at 8:54 AM

Indranee Batabyal said…
This looks really good, though I have never tasted it. Will definitely try out soon.
September 17, 2008 at 4:21 PM

Sunshinemom said…
This used to be such a comfort dish before! Since I can't seem to get soy yogurt i haven't tried the vegan version yet! Yummy stuff this one:)
September 18, 2008 at 4:29 PM

Anonymous said…
I made Kadhi from this recipe and I'm a beginner cooker, and this just turned out DELICIOUS!!! I suggest everyone to try it!!!
September 16, 2009 at 5:50 AM