Tea for a queen

An average Britisher enjoys an elaborate meal of cucumber sandwiches, scones, clotted cream, jam and rich cakes sometime between lunch and dinner. The afternoon tea is more than a meal; its a tradition, the hallmark of British culture and almost sancrosanct. Right? 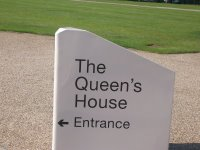 Extremely wrong, as it turns out! Sorry to disappoint all Jane Austen and Wodehouse fans out there, but the English afternoon tea is a fallacy re-created entirely for the gullible tourist. An average Londoner would hop into the nearest cafe and order a cuppa with some finger food just like an average New Yorker would pick up a coffee from Starbucks.

Ah well! a setback to my plans for non-touristy afternoon tea. But then, I can always go to one of the fantasy places. I am a tourist after all. The top of the tourist ladder, Ritz, is sold out. You apparently have to book six weeks in advance. I tried the more unconventional Wolseley instead, but they were full out for the afternoon. There's one thing to be said about London though. The people are so friendly. The conceirge outside Wolseley told me to walk down the street and try Fortnum and Mason.

I have been to the legendary grocery store before (is it heresy to call something as beautiful a grocery store). Today I headed upstairs to their tea room. It's beautiful : chandeliers, live piano, stuffy oversized chairs. Just like a Victorian tea-room should be. There was a queue but I got my table in less than half an hour.

On to tea. There's a wide choice of teas available but I picked Assam out of habit. And along with my tea pot came the three-tier cake stand of the Jane Austen's world. The bottom tier had cucumber and egg sandwiches (I remembered at the last minute, and told them to replace my meat sandwiches). In the middle were fresh, warm scones with clotted cream and jam. The top tier was empty but a very friendly waiter emerged with a plate full of mini-pasteries and tarts. I picked a fruit tart and a delicious little chocolate thing. All supplemented by my two cups of tea.

I haven't eaten so much at one go for a long time, but if those Victorians could do it so can I. And I loved every bit of it. To round up my afternoon tea experience, I plan to go for something less fancy next time. Top choices are Orangery (if its sunny and not too cold) and Cafe in the Crypt. I am a bit fascinated about the last one. Tea! In a crypt!

Bharti said…
How fun Simran! I lived in London for 2 years and never went for one of these teas. Like u said, unless ur looking for a place like that, ur not going to run in to it on the street. What can I say..my friends were more in to checking out the bars! Alas..I would've much preferred to check out what u ate.
September 21, 2008 at 12:05 AM

Vaishali said…
Cucumber sandwiches and scones. What a truly romantic afternoon, Simran. London's a very special city, and you certainly seem to be making the most of it!
September 21, 2008 at 7:08 AM

Siri said…
Lucky Lucky You Simran..:) London sounds fun huh! six weeks in advance.. wow! thats something. cucumber sandwiches with tea sounds yummy! Have a blast buddy and can't wait to see what u say about the 'Big Apple'..:)