March 17, 2009
Do you get amazed by the amount of food blogging facts I don't know. Take this example. For a long time, I had no idea who David Lebovitz is. And for a really long time after that, I had him filed away as "that icecream book guy". It's only recently that I discovered this American in Paris as not just a culinary genuis, but also someone whose writing style I enjoy.

The very first recipe I bookmarked when I was reading David's blog was Strawberry Frozen Yogurt. And with strawberries season about to end in Bombay, and the summer heat about to set in, this was a perfectly simple recipe to make. 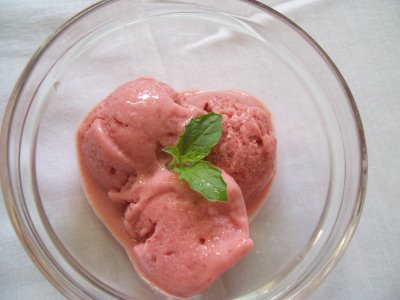 Slice 400 gms strawberries into small slices. David tossed them in a bowl with 2/3 cup sugar, but I remembered just in time that the strawberries here are sweeter so I reduced the sugar to less than half (around 3 tbsp). In around an hour, when the sugar had dissolved, blend the strawberries with a cup of yogurt and juice of half a lemon.

I don't have the fancy Cuisinart icecream maker that Mr. Lebovitz owns so I used the time tested way of icecream-maker-less souls : freeze the yogurt for an hour, beat it for a few seconds in a blender, freeze and repeat twice. By this time, your yougurt is nicely creamy and icicles won't form when you freeze it for a few hours.

I'm sending this lovely yogurt over to Priya who is hosting FIC - Pink/Rose this month.

Anonymous said…
Can i have some from yours please??Mumbai is so hot now,will surely need some more Cool things now ,that my sanity hangs by thread in this sweating season ;-)
March 18, 2009 at 1:32 PM

CurryLeaf said…
Lovely and perfect.Love the way you chose apt dishes.I do visit David blog and am always in awe of it.
March 25, 2009 at 5:52 PM