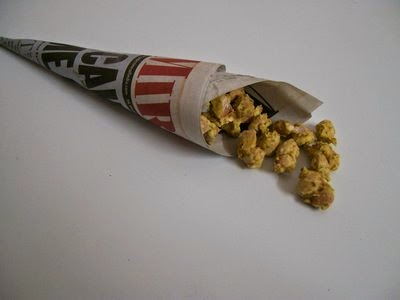 When Mythreyee announced nuts as this month's theme for Srivalli's Microwave Easy Cooking, my only thought was that I can now finally try making masala peanuts at home. Why wouldn't I make them otherwise? Well...no idea really, it's just something that remains on my to-do list but never gets done.

After browsing through several recipes, I decided to follow the Jugalbandits, even though they had made their version in an oven and advised against making it in the microwave. It's five minutes of my time, so how could it hurt.

So I mixed 1/2 cup chickpea flour with salt, ajwain, amchur, crushed black pepper and 1/2 tbsp cornflour. Added water to half of it to make a thick paste and mixed it into a cup of peanuts. Then sprinkled the rest of the flour mixture and mixed it in. I oiled a microwave safe plate and spread the peanuts on it, trying to break the clusters as best as I could (not that I succeeded). Then microwaved it for two minutes, took it out to check everything was going as per plan and microwaved it for another 2 minutes. Let it rest for a couple of minutes and the peanuts are as crisp and delicious as the fried version sold in makeshift newspaper cones all over the city.