September 04, 2010
A couple of years back, my friend sent me a mail. "This woman dumped the guy a day before their wedding because he wanted to get rid of her books. You HAVE to read this!". That evening, I went to my neighborhood bookstore and made my first acquaintance with the residents of Guernsey Islands. And not just any residents, these were the people who had just been through several years of German occupation and were now just getting used to living their lives again. It's 1946, and one of these people gets writing to our heroine, author of several books and living in London.

From then on, the lives of Juliet and the people of Guernsey intertwine. What the book manages to do, in a series of letters (for that's how it's written from start to end), is bring the war closer to our lives. It talks of soldiers and the people of the captured island not as enemies, but as humans who each have been given a role to play.

I don't say this often, but as I read this book the third time for this month's edition of This Book Makes Me Cook, I had to say this : if you only read 5 books in your life, make this one of them.

Because the book talks so much of food shortage and rationing in World War II, I went back and looked for those recipes. No eggs, no butter, no sugar and very little meat - indeed the people had to adapt to cook with what they had. And what they had plenty of at the time was root vegetables. There are recipes galore using carrots, onions and potatoes instead of whatever the dish called for. Of these clever adaptations, I picked the eggless mayonnaise, made with a cooked potato instead. 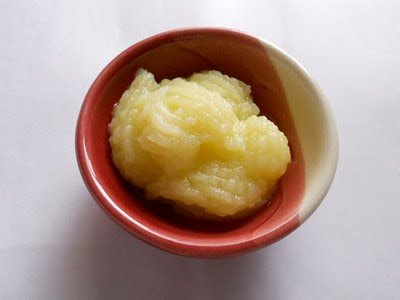 To make this mayonnaise, boil a small potato. Peel it and mash half of it. You can save the rest for something else. Add 1/2 tsp salt and 2 tbsp vinegar. Beat well with a fork; then start to add olive oil in a drizzle, beating it as you go. You would probably need 1/3 cup of oil by the time it reaches the consistency and flavor of mayonnaise.

Is it as good as the real thing? Well, no but if I were stuck with no eggs, I think this will come pretty close!

CurryLeaf said…
Excellent.What you say is true.This book must not be missed.I had almost given up on it but got it just two days back.I do not feel like keeping it down but have to but am very glad that I am reading it.Thanks to BookClub.I will also be ordering the next one as early as possible.Waiting sucks.
BTW,the book has given a guernsey site which has several recipes as well.

PS:I too will surely dump a guy if he is against my books.But nothing can be done if this is known after marriage :(.Well an agreement can surely be reached.And thus I am keeping select books while ordering new ones every month-all within a budget.And my new house has a library cabinet as well.
September 4, 2010 at 11:27 PM

Desisoccermom said…
You are so right. I think a lack of certain essentials is essential for that innovative spirit, especially in cooking. I have never heard of potato mayo but I will take it over the real thing anyday.

I loved Juliet. So smart, witty, funny and independent for her time. I absolutely adored her. This was a really good read. I couldn't put it down till I finished it and now I am reading it all over again for the review.
September 5, 2010 at 12:27 AM

Aparna Balasubramanian said…
Yes, it is indeed a good book. I have to pronounce the potato mayo "interesting" but in times of difficulty one must make the best of what one has.

I am well enough to write this comment, so maybe I can have my post done in the next 2 or 3 days. Can't promise you a "austere" dish, but you can expect some potatoes. :D

Luckily for me, all three of us are book lovers, the only problem now is finding space for them!
September 5, 2010 at 8:27 AM

Even i wanted to participate in the event, but cldnt find any of the books in the store here, so coulnt, maybe 4m next time , i'll order online as u had informed me.

Adele said…
Very beautiful, Simran. The dumping of the fiance was also one of my favourite parts of the book. Love your recipe.
September 6, 2010 at 3:45 AM

Nice choice of mayo made of potatoes... :)