How to eat mincemeat in March

March 25, 2013
But then, you may wonder why someone would want to eat mincemeat in the first place. To begin with, there is the whole confusion with the name. For years, I kept away from mince pies as I assumed they had meat. It was only around last christmas that I figured that this was a misnomer and the mincemeat referred to a concoction of dried fruit, sugar and booze. At around the same time, I learnt that mince pies get a bad rap for being too sweet and too stodgy and generally not good.

But then, I tried them and fell in love with mince. I think my lack of experience with mince pies of yesteryears helped. This year, London supermarkets were stocked with Heston Bluementhal's dreamy puff pastry pies that came with sachets of pine needle sugar. Even my school did some great take with filo pies and there wasn't a stodgy shortcrust one in sight.

Of course, the jars of mincemeat went on sale at the same time and I brought one home. But then I didn't get around to baking with mince in December and it sort of went to the back of the shelf. After all, you can't possibly eat mince pies in the new year. Instead, you call them fruit cookies. 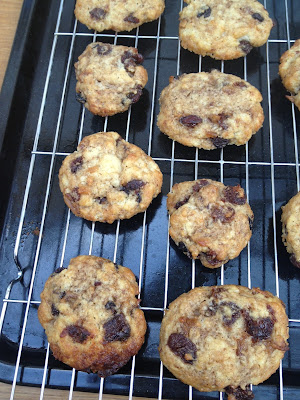 The recipe comes from Jamie Oliver, naturally given the British obsession with mince and thus his long experience with leftovers from christmas. First off, leave 250 grams butter out of the fridge to soften. A few hours later, set the oven to preheat at 180C and beat the butter with 140 grams sugar until light and creamy. Add an egg yolk and beat to combine. Add 300 grams plain flour and mix to form a dough. Now add a jar of mincemeat (which for some strange reason, is always 411 grams) and mix well. The dough will be fairly wet and I found it best to mix with my hands.

Pinch out balls of dough and place on a baking sheet lined with parchment, pressing down a little to flatten. Bake for 10-15 minutes until golden. Wait until cookies start to cool and harden, then transfer to a cooling rack. The cookies are very delicious but also soft and moist so its best to eat them the day they are baked. Not that that's going to be a problem!