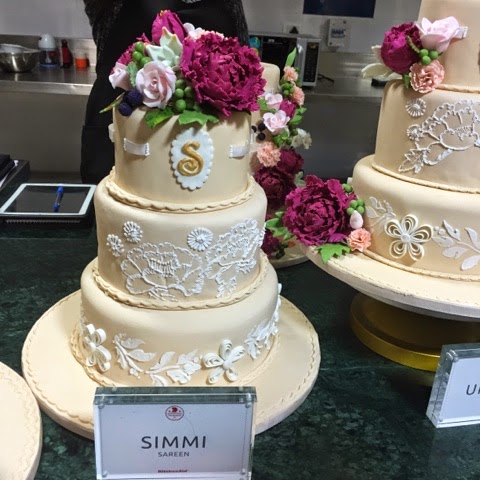 Oh! what a week it was. I arrived in Delhi on April 15, all set to meet the other 7 finalists of the kitchenaid probaker contest. But the star of the show was chef Peachy Juban, who had flown in all the way from Manila to teach us cake decorating. It's a good thing she thought of starting with the very basics, specially for someone like me who hadn't even seen fondant before, let alone work with some.

And so it started, five days of cake decoration. For the first two days, we made all the flowers you see on top of my cake. And then we went into things I didn't even know existed; like sugar quilling and brushwork embroidery. It was super tiring but super fun. All through the five days, the kitchenaid team made sure we were enjoying our evenings. One day, we went to the show at Kingdom of Dreams, another day it was dinner with the owner and chief menu designer of Johnny Rockets. There was also a dinner at Gurgaon's only Goan restaurant. The highlight of the whole week of evening socialising though, was the dinner at Farzi Cafe. With molecular gastronomy expertly applied to Indian food and dishes like dal chawal arancini and molecular phirni, the restaurant impressed with both presentation and flavour.

Five days later, each of us had assembled the cake you see above. It was clearly the biggest food project I'd undertaken and it led straight to finals day. The theme of the finals day was haute couture and each of us were meant to use all we learnt to create a fashion inspired cake. I drew JJ Valaya, and I tried my best to replicate one of his wedding lehngas onto a cake. Didn't win in the end, but I won so many friends - not just the other seven contestants, but other folks (kitchenaid team, cake decorators, hotel management students) who volunteered to help during the week. All in all, one of the most fun weeks of my life. But doesn't that always happen where there's cake, and also in this case, tons of sugar!