July 31, 2015
At the end of my interviews with Sugarcrafters, I intend to ask them to share one of their signature recipes. Just so I can recreate some of that magic at home. When I asked Chef Deep this question, he didn't give me a recipe, he gave me a jar. 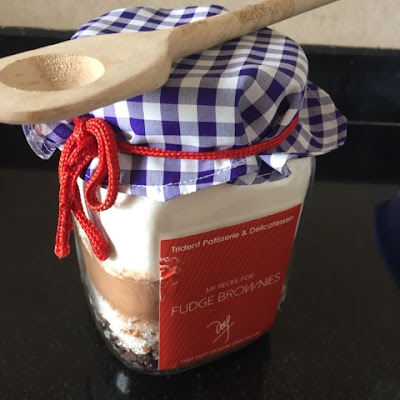 Chef Deep introduced these DIY jars after he took over as the executive pastry chef for the Trident Patisserie for his customers to easily recreate his bakes at home. In fact, everything about these jars defines thoughtfulness and ease. The recipe is printed on the jar itself so you don't have to look around for any extra papers. There's even a wooden spoon attached to the jar to stir your batter and the jar itself will come in handy once you have finished baking your brownies so you can store the goodies.

My only complaint was the recipe - it could have been written a bit more clearly, as I had to mail Chef Deep to clarify a few doubts before I started baking. But all that is excusable when you look at the sheer goodness of these brownies. First off, the layers of ingredients - flour, cocoa powder, sugar, walnuts and chocolate chips - produce a batch of brownies that's a lot more generous than you would guess from looking at this jar. You only need to add some butter, some milk and a tiny bit of water to make the dough. Yes, the thick batter is more like a cookie dough so I took some time adjusting to the fact. But then I just went ahead and pressed the dough into a parchment lined pan. Chef Deep said to keep the brownies undercooked as they will firm up later. So I baked these for 35 minutes, pulled out the tray and let it cool for many, many hours before I could cut squares like these. 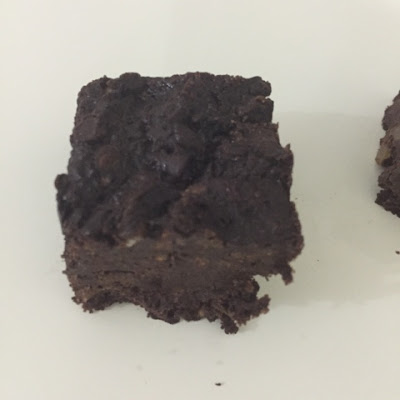 And how were the brownies, you ask? These are the darkest, fudgiest brownies I've tasted. These are not the kind you nibble casually between meals. Instead, these are brownies you sit down with, a glass of milk nearby. I ate a few, shared a couple with friends, but I've also stashed some in the freezer for a rainy day. Because brownies as good as these should always be around.