Tingmos for 'We Knead to Bake' 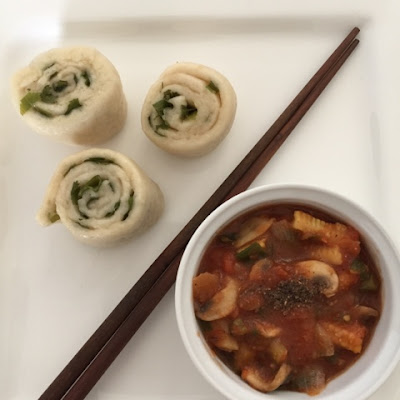 A few years back, a group of bakers started 'We Knead to Bake' - a monthly bread baking group. At that time, I was busy moving between countries and student life and work so I had to pass on the bread baking challenges. But I've been following the group's beautiful breads and finally, this month on, I've decided to join in as well.

As luck will have it, the first bread I got to make wasn't baked but steamed. The group chose to make tingmos, a Tibetian/North East Indian steamed bread that's used to mop up everything from hot sauces to noodle soups to curries. The dough came together beautifully and even when risen, was one of the nicest doughs I have worked with.

With a coriander, ginger-garlic and spring onion filling, the buns are good enough to eat on their own. But I chose to make a meal out of it, pairing the buns with a sweet and sour vegetable curry full of flavour from the Tibetian kopan masala. The full recipe follows, but once you've read it, you should also head over to Aparna's to see what versions everyone else came up with.

To make kopan masala: Heat a small pan and dry roast all the ingredients for 4-5 minutes until fragrant. Grind to a coarse powder.

For sweet and sour vegetables: Slice the spring onions thinly keeping the white (onion) and greens separate. Wash the mushrooms and slice. Also cut the babycorns lengthwise into pieces about as long as the mushroom slices.

Heat oil in a pan. Add the ginger and then the minced garlic. After 1-2 minutes, add the sliced (white part) spring onion. Sprinkle some salt and saute until the onions start to brown. Then add babycorn and after a couple of minutes, mushrooms. Stir fry on a medium heat until the vegetables are partly cooked. Then add the spring onion greens, chilli powder and half the kopan masala. Stir well, then add the fresh tomato puree, vinegar and the ketchup. Bring to a boil and let cook until the raw tomato smells goes away, about 5 minutes. Taste, and add more salt or kopan masala if need be.

For Tingmos: Heat the water so its warmer than lukewarm but not boiling. Add the yeast and let rest for 5 minutes. Now add the flour, baking soda and salt and knead to a smooth dough. Coat with oil and set aside in a covered bowl for 45 minutes to an hour, until the dough doubles in size.

Roll out the risen dough into a square, rolling it as thin as possible. Spread the ginger-garlic paste all over the dough. Mix coriander with spring onion greens and sprinkle all over the rolled out dough. Roll up the dough as you would a swiss roll, and cut into 6-7 slices.

Lightly oil a steamer and place the rolls upright (so cut sides face up and down), leaving enough space between rolls for them to expand. Cover and let sit for about 15 minutes while you set the water in the steamer to boil. Steam the tingmos for 15 minutes until they are puffy, firm and cooked. Serve warm with the vegetable curry.