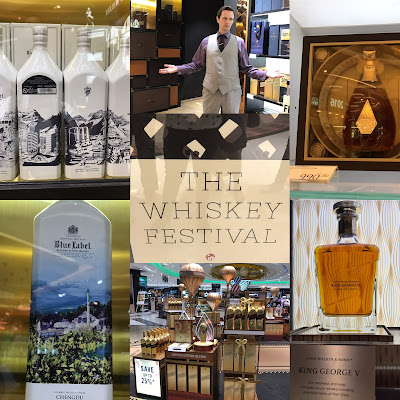 The very first thing I loved about international travelling were the glitzy shopping malls that seem to be a part of every airport. My first trip out of India, I was amazed at how Heathrow mimicked an expensive London high street, with everything from Hermes to Harrods. Many travels and airports later, I still wonder about duty free shopping. Is it really that cheap? Do people really have time to spend wandering the halls full of stuff when there is a flight to catch? And why do we have such huge duty free shops in Indian airports when everyone always talks about bringing cheap alcohol back in, not take it out.

Luckily, all of these questions are about to be answered. Duty Free Shopping (or DFS, as it is called in Mumbai) invited a group of bloggers over to their Mumbai international airport stores last week. We talked a bit about duty free and then, we talked a lot about whiskey. Why whiskey, you ask! Well, they had a whiskey festival on and the Johnny Walker brand ambassador was around to give us a run of the shop.

So yes, duty free shopping is cheap. Alcohol, tobacco and beauty products are the best sellers in duty free shops around the world and our host Nidhi told us that prices in Mumbai are some of the lowest. That still doesn't explain who buys this stuff - surely European travelers are taking back souvenirs from the Culture Shop but I don't see them carrying back bottles of wine. Turns out it's the Indian folks who reserve their shopping on the way out and pick it up when they land back.

And this being India, most of them pick up bottles of whiskey. Which is why DFS has a whiskey festival on, offering not just discounted whiskeys but also special glasses to drink them in. So let's talk whiskey. Or rather, as someone who doesn't drink it but found the tour by the super cute Diageo brand ambassador Nick fascinating, let't talk Johnny Walker. 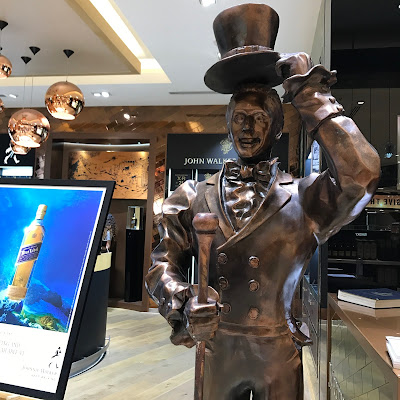 One of the most iconic brands in the world, you unconsciously think of Johnny Walker as synonymous with whisky, even if you don't drink it much. But as Nick walked us through the store and spent an hour talking about the brand and the history of the drink, I discovered several nuggets of information I found fascinating. Here are my favourite takeaways:

1. All JW whiskeys are blended. Johnny Walker took inspiration from tea blending to create a new category of product, separate from single origin whiskeys which were the norm way back in the 15th century.

2. Mr. JW was one heck of a traveller. In the time before airplanes, he took ships all over the world, getting inspiration for his blends. JW has these really cool bottles that illustrate his travels. The one for Mumbai is super cool, even though it costs a pretty penny.

3.  It was Mr. Walker's sons who were next in line to be master blenders and they took the brand global. A series of master blenders ensues, all of whom go round buying casks of whiskeys and selecting the ones that go into the blends.

4. Believe it or not, the current master blender is called Mr. Beverage.

5. These things are expensive. You can google all the science and lingo behind single malts and blends and what not. But Nick insists that oldest in not always the best. It's expensive because as the whiskey sits in casks, it loses about 5% volume each year, so you have precious little left at the end of 20 years. But it is on the master blender to find the best tasting 20 years olds of the many he tastes, which is why something like a founder's blend they have gets quoted for around 5000 dollars.