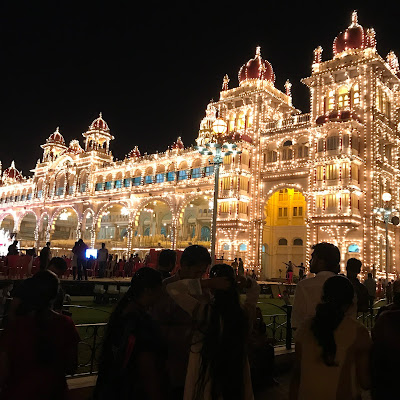 For the last 400 years, Mysore has celebrated the victory of good over evil with a 10-day festival. Indian festivals are complicated - the same day that Durga Puga is celebrated in West Bengal and North India celebrates the victory of Lord Rama over the evil Ravana, Karnataka celebrates the killing of an entirely different demon - Mahishasura - by the goddess Chamundadevi. But whatever demon you think was killed this time of the year, most of India has 10 days of festivities a month before Diwali. In the 15th century, Mysore's kings decided to make it into a state festival and the tradition continues till date.

This year, I found myself in Bangalore on a Friday for a work trip. And because this is a short 3 hour drive to Mysore, it seemed like the perfect timing to check out the Dasara festivities. From that festive weekend, here are my top picks and tips on making the best of Mysore:

Take in the lighting: The whole city lights up for the festival and the Mysore Palace is a beautiful sight. This is peak tourist season which means there are queues to get into the palace at night and it takes a while to get in, but make it inside and it's really quite something to see the magnificent palace all lit up. The Palace grounds are host to a cultural festival and we caught an excellent dance performance the night we were there. But this is not the only performance location. The Maharaja College caters to a younger crowd with 'Yuva Dasara' and a host of pop/rock performances. They even had a coke studio concert this year.

The 10th day of the festival is when the big parade happens through the city. The royal family brings out the icon of Goddess Chamundadevi that sits atop a decked up elephant. There are hundreds of thousands of people who line the streets to watch the procession so it can get a little intense. We didn't stay in town long enough for the parade but even a couple of days early, you will see the elephants out for practice runs.

Walk, cycle, fly or drive: I make it a point to look up walking tours when I get to a new city and Mysore has a great option in Royal Mysore Walks. They offer walking tours of the illuminated city as well as cycling tours. What we opted for, though, was a drive in their vintage jeep. 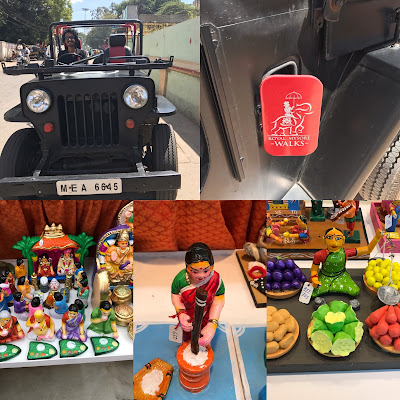 Not only did Faizan show us the city, tell us about the evolution of Dasara but he also pointed out two unique traditions. One is wrestling - during the festival, wrestlers from all over the country come to Mysore for a championship. The other one is a doll display that houses put up. We visited a doll shop that had ceramic and clay dolls will themes ranging from dasara festival to weddings to Disney cartoon characters. Most households who follow the tradition pick a theme, then add figurines each year to match.

If you are feeling particularly adventurous, you also have the option of a helicopter ride over the city.

Stay in a heritage property (not!): When picking hotels for stay, I am partial towards newer properties. Which is why I immediately zeroed in on Grand Mercure, a 5 month old property in Central Mysore. It's beautifully built and staff is super eager to help. Our room came with free breakfast and a choice of either free lunch or dinner, and the buffet meals didn't disappoint. And this is where we stop and talk about food in Mysore.

Eat a dosa, or few: You can't really go wrong ordering a dosa in Mysore and the ones in our hotel breakfast were nice enough. But to grab one of the best dosas in town, you need to make way to Vinayaka Mylari in Doora. They make only one kind of dosa, filled with some hard to describe masala. But these dosas are the softest I have eaten and quite unique. 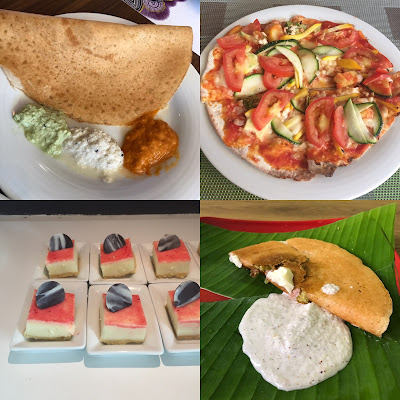 Outside of dosas, mysore has plenty of dining options in Doora and JLB Road. But remember that Mysore is a sleepy town and everything closes early. By the time our coke studio concert ended at 10.30, pretty much everything in town was shut. So eat early or eat at your hotel.

I can't complete a Mysore chronicle without talking about the iconic Mysore Pak. I personally find it way too sweet but if it's your thing, or you want to at least try it once, make your way to Guru Sweets, just outside the bustling Devaraja Market. And if you are exhausted with all the crowds by then, you still ought to grab a cup of filter coffee at Indra Cafe before you head back out to Bangalore.