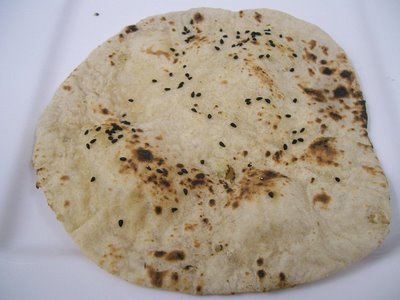 I know what you see up there is a naan. But let's pretend for a moment we are making bread. For I had bookmarked this recipe for potato bread a zillion years ago. And that's what I set to make.

Chopped and boiled 100 gms potatoes until they are soft. Mashed them along with 3/4 cup of water they were boiled in. While the potatoes were boiling, I added a tsp of sugar to 1/4 cup warm water, then sprinkled a tsp of yeast and let it proof for 10 minutes.

To the potato/water mix, I added a cup each of whole wheat flour and plain flour, 1/2 tsp salt as well as the yeast. Once everything was mixed well, I put the dough on a flour-dusted surface and kneaded it for 10 minutes or so. It was a fairly wet dough, but got it to get smooth. Oiled a large bowl and put the dough in it to rise to double it's size.

By the time the first rise ended after an hour or so, I didn't want the bread. I wanted a naan instead. And if someone deserves to throw a tantrum after days of snivelling and snuffling with a cold, it's me. So I pinched a lemon-sized ball of dough, dusted it with flour and rolled it out to a circle thicker than a roti, but thinner than a parantha (work it out yourself now, I really can't think of a better description).

Heated the iron griddle to super hot, then plonked the naan on it. Now, working quickly, you have to brush some water on top of the naan, sprinkle nigella seeds and press with a spatula to make them stick. Once the underside is cooked, lift the naan and invert it directly on the open flame to cook the other side. Wait for a few seconds for this side to brown.

Now bring on your best paneer curry; for this is the most fabulous of naans.

PS: I did make the potato bread too the next morning, but I love the naan more.

Anonymous said…
Simran thanks a lot for this recipe.. call it bread or a tantrum naan, this looks good:-) & the stove top/ broiled one gives the authentic spot. the potato must have made it real soft.
January 10, 2009 at 8:10 PM

FewMinute Wonders said…
Are you an aquarian too? Wow! The potato naan is looking good. I need to book mark this recipe.
January 11, 2009 at 4:36 AM

Anonymous said…
Nice Blog.I really like your content.Thanks for sharing.