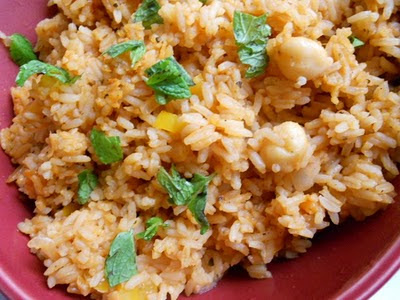 This one's for the sundays you don't really feel like cooking much. Also for days when you don't want to go out and shop for food. As long as you have rice and some tomato puree, you can design this recipe to use whatever you have languishing in your fridge.

For this week's version, I chopped an onion finely. Also found a yellow pepper I didn't know I'd bought and chopped it finely too, minus the seeds. While this was happening, I washed and soaked half a cup of rice and took out a cup of mushroom stock from the freezer.

Next, I heated a tbsp of olive oil in a pan. Added two cloves of garlic that I'd peeled and minced. As the garlic started to sizzle, I added the onion and the peppers. Stirred it around for a couple of minutes until the onion had started to turn brown. I then drained the rice and added it to the pan. Mixed it well with the veggies and let it cook for a minute or so. Next in, 2 tbsp of tomato puree. Waited another minute, then added the mushroom stock alongwith some salt, pepper and my current favorite seasoning : herbs de provence. I let the stock come to a boil, then reduced the heat to a simmer and covered the pan.

Five minutes later, I remembered the bowl of chickpeas I'd set aside for hummus that was never made so I went back and added them to the rice. I figured the time delay wont matter much since the chickpeas were already boiled and it didn't. As long as I was adding stuff, I also pitched in with a dash of smoked chipotle sauce (another recent craze; I add it to everything!).

Covered the pan back again and let it simmer until the rice was done, with the stock all absorbed. Some torn mint leaves added the final fresh touch, and then time to go back to lazy sunday nap!

chef and her kitchen said…
My sunday lunches will always be some kind of rice items like this only dear..and this sunday we had Mushroom Dum Biryani for lunch..:)
Those new spices in d rice looks quite interesting dear....
November 1, 2010 at 11:55 AM