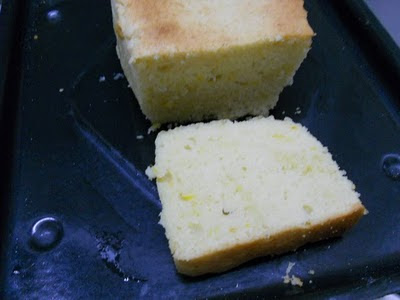 Or Not a fail exactly, but not perfect either. My friend is looking for a cake he used to eat and love many years ago. He says it was a plum cake, but when I showed him one of those, it turned out to be a different species. From what he describes his cake to be - brown at top, soft and buttery inside, no chocolate or nut or fruit in sight - it has to be a pound cake.

Now I've never made a pound cake before this. But in the past week, I've tried two recipes. The first one was New York Times' Citrus Almond Pound Cake. I don't quite know what happened but the batter was too thin when it went into the oven. It seemed wrong when I put it in, and an hour of cooking didn't make it any better.

The second one, that you see up there, is from smitten kitchen. It was soft, buttery and once I added the glaze that should have originally gone on the NY Times cake, parts of it were totally delicious. But only some parts. I baked it in a loaf tin, and while some parts of the cake got too dry, there were sections that were undercooked. I did check with the whole toothpick routine, but obviously I missed and had to throw away whole slices from the center of the cake.

What am I doing wrong? Do you have a fool proof recipe I can try? HELP!!!

FewMinute Wonders said…
Simran, too bad that it was not a success two times. If you are looking for a pound cake it has to be dense and not soft. Will look up my recipe book and get back to you soon.
October 9, 2010 at 2:59 AM

notyet100 said…
will let u knw,..if i get one even i faced the same problem when i started baking here in singapre now i reduce the temperature while baking,try to do the same...
wish u happy dussehra,..:-)
October 9, 2010 at 7:35 AM

Rachel said…
Been a while since I dropped by. As for the poundcake I use the one on joy of baking site, where the recipe is from the Cake Bible. It has never failed me.
October 9, 2010 at 8:54 AM

CurryLeaf said…
Simran, I was vary of pound cake but was so smitten by Deeba's lime buttermilk( http://passionateaboutbaking.blogspot.com/2010/09/baking-lime-buttermilk-pound-cake.html) one that I tried it with oranges and it came out perfect.Its perfect for beginners I would say
October 9, 2010 at 1:10 PM