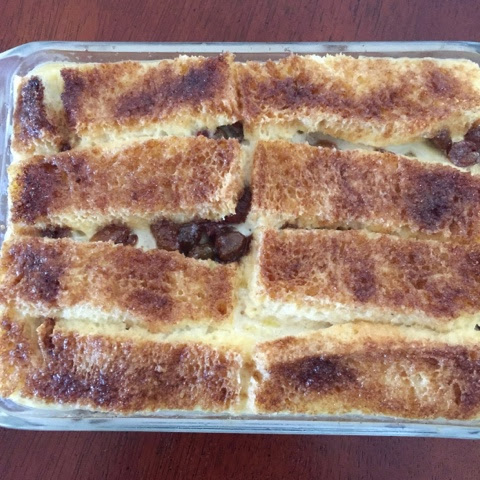 Many, many years ago, I set to make bread and butter pudding for New Year's Eve dessert. I was pretty new to baking, had never tasted a bread and butter pudding, never made a custard before and was working off a dubious recipe. Needless to say, that new year rang in solely on the strength of the savouries and no pudding came to pass. Since then, I've eaten this comforting pudding a few times. I've liked a couple of versions, found most too eggy and never tried making it myself ever again.

But I tried it again today and am proud to say it's perfect. Soft and creamy, yet crunchy in parts and not even eggy. This time, I did a thorough research and picked a recipe by the British queen of baking - Mary Berry. In fact, the recipe comes from Mary's mother so it's as traditional a recipe as you can find.

I made a few changes though, but I think the pudding is better for it. So follow along. Take an 8 inch glass or ceramic dish. Melt 100 grams butter and brush some of it along the base and sides of the baking dish.

Take 8 slices of white bread, cut off the crusts and then cut each slice into three pieces. Dip one side of each slice in melted butter. Arrange 8 pieces of bread in a single layer on the baking sheet, buttered side down. Mix 150 grams raisins or sultanas with 75 grams caster sugar and spread half of it on the bread. I still have some leftover mincemeat so I used some of that instead. Add another layer of bread, buttered side up. Add the rest of the dried fruit (or more mincemeat) and top with the third and final layer of bread, buttered side up.

Now make your custard. In a bowl, whisk together 200 ml cream, 250 ml milk, 2 eggs and 1 tsp vanilla essence. Strain and pour over the bread. Sprinkle 2 tbsp brown sugar on the top and let rest for an hour. Heat the oven to 180C and bake the pudding for 40-50 minutes until it's set, browned and risen a bit.