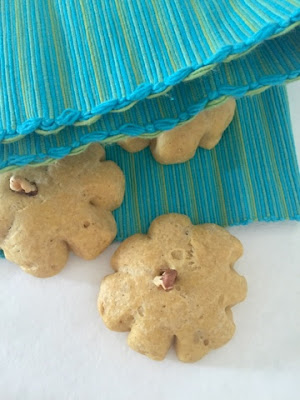 India does not have a Thanksgiving tradition. But then, tradition or not, what's the point in ignoring a festival devoted almost entirely to eating and shopping. As a vegetarian, the turkey meal at thanksgiving is not of much interest to me. But there are so many sides to pick from and so many variations on the pumpkin. So for today's thanksgiving special, I bring you a bread roll that's not only shaped like a tiny, squat pumpkin but is also chock full of pumpkin puree and flavour.

The pumpkin bread was the bread of the month at my bread baking group 'We Knead to Bake'. Every recipe I have baked with this group has been a winner and this is no exception. The rolls that come out of the oven are super soft and amazing with a pat a butter. Plus the house smells of cinnamon and ginger and nutmeg for hours. The original recipe makes 8 rolls but I halved it so the one below makes 4 tiny pumpkins, just enough for 1-2 people.

If you are using whole pumpkin rather than store bought puree, peel the pumkin, halve and remove all the seeds in the middle. Cut into cubes and steam until soft. Cool, then puree until smooth in a blender. You will get far more puree than you need for this bread even with a tiny pumpkin but you can freeze anything extra for more rolls or pies or countless other pumpkin dishes you can make.

I use my kitchenaid dough hook to make bread doughs but this is also doable by hand. First off, warm the milk to slightly higher than lukewarm. Put in the mixer bowl alongwith honey and yeast and set it aside for 5 minutes for the yeast to bloom. In the meantime, melt your butter and mix all the dry ingredients in a bowl. Fix the dough hook and pop everything (dry ingredients, pumpkin puree, melted butter) on top of the yeast. Knead until you get a soft, sticky dough. If you started with 1 1/4 cup of flour, you might need to add a bit more if the dough is too wet.

With wet hands, remove the dough to a bowl, cover loosely and set aside for about an hour until doubled. Divide the dough into four equal portions, taking care not to deflate it too much. Shape each portion into a ball and flatten it a little. With a scissor, make 8 cuts at equal distance from the edge towards the centre of the ball, leaving the centre uncut so you have something looking like a flower.

Place the flowers on a parchment lined baking sheet, leaving enough space between them to expand. Let them rise for about 30-40 minutes. Add the walnut or pecan sliver in the centre to make the stem and brush the rolls with milk. Bake in an oven heated to 180C for 20-25 minutes until the rolls are well risen and golden. Let cool on a wire rack for 10-15 minutes before digging in.