The Soul of Punjab 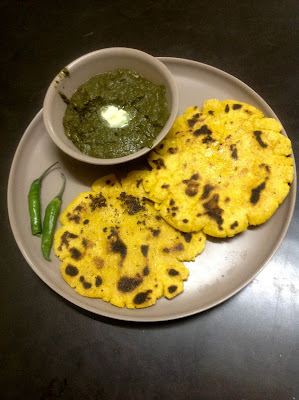 The moment you mention to someone that you are a Punjabi and a foodie, you are likely to hear one of the two things in the sentence that follows: 'Butter Chicken' or 'Sarson ka Saag'. Of these two iconic dishes, butter chicken is a year round phenomenon and of little interest to me as a vegetarian. But let's talk of sarson ka saag or mustard greens that are just coming into season and will be a staple diet in Punjab for the next three months.

Before I get to the recipe, I need to add a little preface about the food in Punjab. We are an agrarian state, which means that most of our traditional dishes are peasant food - simple to make and hearty enough to help the men and women brave a hard day of work on the fields. Even though most folks I know no longer sweat it out on the fields, not much has changed food wise. Dainty dishes, small portions and fancy food doesn't really go down well in my hometown and literally everything gets served with a large dollop of homemade butter. Which means that first timers get surprised by how simple in flavour and yet how rich this dish tends to be.

What you won't be surprised by is the process of making saag, since this is my mom's version of recipe, using food processor instead of the tools my grandmother used. Her two favourite aids to making saag, now rusted, still hold a prized place in our kitchen - a daatri or an arc like chopper used to cut the greens and a ghotna, something like a potato masher used to mash the cooked greens later in the process.

One final note before I get to the recipe. Although the name suggests the dish is cooked mustard greens, saag is in fact a mixture of at least three different leaves since mustard is too bitter on its own. Spinach is of course widely available, but the third one - bathua - is harder to get hold of outside north India. Mom says it's ok to leave it to out or add a bit extra spinach if you can't find it.

Cut off any hard stalks off your mustard greens, leaving only the leaves and small tender stems. Wash all the greens to remove any dirt and cut into thin ribbons. You can also chop them roughly in a food processor to speed up the process.

In a large pan, put the chopped greens along with 4 cups water, green chillies, 1-inch piece of ginger (peeled) and peeled garlic cloves. Bring to a boil, then reduce the heat and let cook until the greens are tender, about 45 minutes. Let cool a bit, then pop the whole mix into your food processor and grind to a smooth puree.

Pop the puree back into a pan and add cornmeal, stirring constantly to avoid lumps. Simmer for 10-15 minutes until most of the excess water has dried out. You can now temper the saag if you plan to eat immediately, or pop it in the fridge for upto a week.

Just before serving, finely chop the onion and the remaining piece of ginger. Heat ghee in a pan, add onion and ginger and saute until the onions are lightly browned. Add the cooked greens and saute for 5-7 minutes.

The saag is almost always served with a hearty dollop of homemade sweet butter and a cornmeal flatbread called makki ki roti. I really did try to get you the roti recipe as well but mom's description of the process involves specific hand movements and other touchy feely stuff that doesn't quite translate into English. So until I find a way to get you her video making makki ki roti, you might have to make do with your regular rotis. Or plan a trip to Punjab this winter.