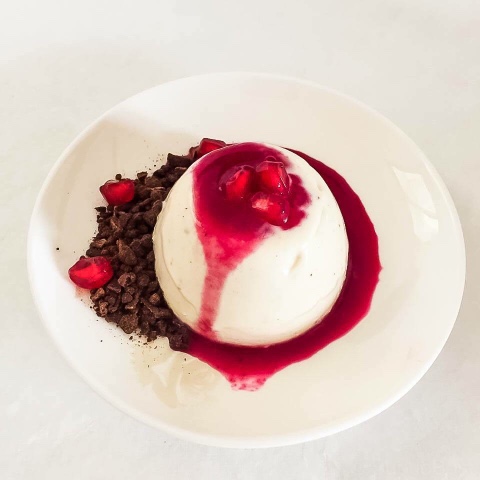 We are at that time of the year that's the cusp between summer and winter. It never really gets too cold in Mumbai but the air will start getting a little nippy in the evenings soon. Even when everyone is starting to talk about pumpkins and gingerbread, right now it feels too early to let go of the bright fruits and vegetables of the summer. Which is why this panacotta is a perfect dessert.

The panacotta itself is the 'warm' and wintery element in the dessert, full of cinnamon and nutmeg and ginger. To complement the creamy panacotta, I have added two more components. Well, three if you count the fresh pomegranate seeds. In addition to the pomegranate seeds, there is a pomegranate syrup, made fresh at home and tangy enough to cut through the panacotta's sweetness. The final element - the chocolate soil - provides the much needed textural contrast.

If you have never made panacotta before, let me assure you that this is the easiest dessert to whip together. No good panacotta recipe takes more than 5 minutes of effort but always looks fancy and elegant. And the chocolate soil might be my biggest discovery this year. I first saw the recipe as part of one of the Heston Blumenthal desserts. His version is too sweet so I've tweaked it to make it crunchier. The recipe makes more than you need for your panacotta but I dare you to stop munching on the soil; it's that addictive.

Take a bowl of water and soak your gelatin sheets in it. If using gelatine powder, add the gelatin to 1 tbsp water and set it aside. Heat the cream on a low heat until it's hot (but do not let it get to boiling point). Add the chocolate and the spices and stir until the chocolate melts. Take the cream off the heat and add the powdered gelatin, water and all to the mix. If using sheets, squeeze out the water and add the sheets to the cream. Stir until the gelatin is completely dissolved in the warm cream. Pour the panacotta mixture into three small ramekins or silicon moulds. Let cool, then put in the fridge for 1-2 hours to set.

While your panacotta is setting, make the other elements of the dessert. Keep a handful of pomegranate seeds aside and put the rest in the blender. Blitz for a few seconds to partly crush the seeds, then pass through a fine mesh sieve to get pomegranate juice. Put the juice in a pan along with the lime juice. Bring to a boil, then reduce the heat to low and let the juice cook until it is reduced to half.

For chocolate soil, chop the chocolate into tiny pieces. Combine water and sugar in a non stick frying pan. Put on a medium heat. Stir for the first minute until the sugar dissolves, then leave the boiling syrup on its own until you start to see the start of the caramel color on the edges of the pan. This can take a few minutes so be patient and stay close to the pan. As soon as the sugar starts to color, turn off the heat and add all the chocolate. Keep stirring - at first the chocolate will melt and it will all be one pool of liquid chocolate. But as the mixture cools, it will turn into soil-like crystallised chocolate. Let cool completely and then, if you can find them, add cocoa nibs for some extra crunch.

Invert your set panacotta on a plate. Pour over pomegranate syrup, add a tbsp or so of chocolate soil to the side and sprinkle some of the reserved fresh pomegranate seeds to finish.