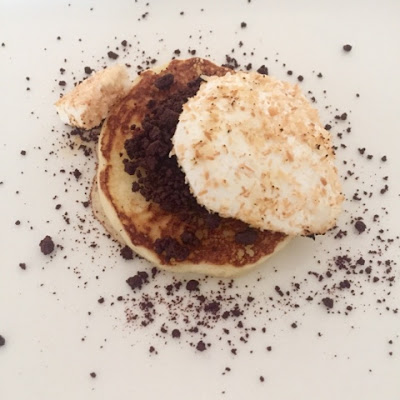 Eight years ago on this day, I baked my first cookie, a chocolate spiral shortbread. I placed the plate of cookies on my sofa, clicked a shaky picture with my point and shoot Nikon and wrote about it on this newfangled thing called blogspot. Bombay Foodie was born.

To celebrate eight years of this delicious journey, I wanted to create a dish that I could not have made this time in 2008. Not only was this dish beyond my technical capabilities at the time, it was something I could not even have imagined. Naturally, I made s'mores pancakes.

The pancake recipe comes from the 'Genius Recipes' section of Food52. The genius part of the recipe is that egg whites are stirred in at the end, making a batter that gives the fluffiest pancakes. On top of my tiny pancake, I added a touch of molecular gastronomy with chocolate soil. As the chocolate started to melt on the warm pancake, I added the final flourish - a coconut marshmallow. At this point, you bring out the torch and toast the marshmallow. Not too much though, because you don't want to burn the coconut. The whole thing is small enough to be picked up and eaten in two bites.

If you are still reading this, dear reader, thank you for being a part of this journey! And Happy Birthday, Bombay Foodie! Here's to many more years.

You can make the marshmallows and the chocolate soil upto a week in advance.

For marshmallows, pour coconut in a non stick pan and cook on a low heat, stirring constantly, until toasted. Line a small baking sheet with parchment and spread coconut all over. Mix sugar, 1/4 cup water and glucose in a saucepan and put on a medium heat. Stir until the sugar is melted, then put a thermometer in and leave the pan alone until it hits 240C.

While the sugar is boiling, soak gelatin sheets in plenty of cold water. Wring out 5 minutes later, put in a small pan with 1 tbsp water and heat until melted. Put into the bowl of a stand mixer. Add the sugar once it reaches 240C and start the mixer on a low speed. Increase the speed gradually and whip until the mixture is fluffy and about three times the original volume. Add vanilla and give it a few seconds to get mixed in. Take two lightly oiled spoons and drop spoonfuls of marshmallows over the coconut. The mixture will be very sticky so be patient. Once all the marshmallows are spread on the sheet, leave it aside for 4-6 hours to dry. Once dry, flip the marshmallows to coat the top with more coconut and store in a airtight jar (not in the fridge).

For chocolate soil, chop the chocolate into tiny pieces. Combine water and sugar in a non stick frying pan. Put on a medium heat. Stir for the first minute until the sugar dissolves, then leave the boiling syrup on its own until you start to see the start of the caramel color on the edges of the pan. This can take a few minutes so be patient and stay close to the pan. As soon as the sugar starts to color, turn off the heat and add all the chocolate. Keep stirring - at first the chocolate will melt and it will all be one pool of liquid chocolate. But as the mixture cools, it will turn into soil-like crystallised chocolate. Let cool completely and then, if you can find them, add cocoa nibs for some extra crunch. Again, store in an airtight container but preferably not in the fridge.

When you are ready to eat pancakes, make the batter. In a bowl, mix together flour, sugar, baking powder and baking soda. In a second bowl, whisk together buttermilk, milk, egg yolk and vanilla essence. Add melted butter and mix. Pour over the dry ingredients and whisk until just combined. Finally, add the egg white and stir until it mixes in with the batter. Set aside for 5 minutes.

Heat a non stick pan and brush with melted butter. Drop spoonfuls of batter. Wait a couple of minutes for the pancakes to brown, then flip and cook the other side. Top each pancake with a layer of chocolate soil and a marshmallow. Toast marshmallows lightly with a kitchen torch just before serving.

pravin said…
'Several times during the making of this hummus, you will doubt yourself' So true! But now that I've read this post, I'm tempted to try it out. Thank you for sharing this. :)
April 25, 2016 at 8:10 PM