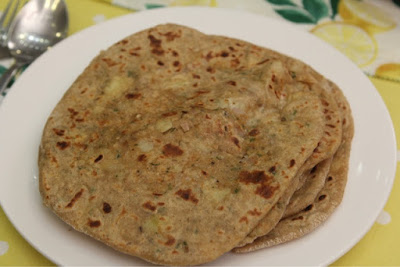 In all these years of blogging, I've somehow never managed to talk about aloo paranthas, the potato stuffed flatbread that's a standard breakfast in North India. Possibly because they are such a staple in our home, I found there wouldn't be enough interest in the recipe. But I've also realised over time that my mom's recipe is unique, using a combination of flavours and spices that make these paranthas delicious.

But that's not the only reason for this post. I also wanted to tell you about a super cool party and some ways we found to make aloo paranthas even better and believe it or not, healthier. The party in question was hosted by Rushina at her cooking studio a few months back. For a while now, Rushina has been talking about the merits of cling film, parchment and something called cooking foil made by Asahi Kasei. Because we won't believe that you can really cook without oil but using science, she invited a bunch of us over for a potluck lunch.

I decided to make aloo paranthas and I did two things differently. One, I used the cling film to wrap potatoes in and microwaved them instead. It took about 6 minutes and the potatoes cooked so much better than the boiled version. They are also drier which makes for a better potato filling. Secondly, I used the cooking foil to line the pan which means that the paranthas won't stick and you can cook them without all the ghee that typically goes in one. Now mind you, I didn't really stick to the plan because I am a Punjabi and I can't not put ghee on parathas. But you can get away with very little and the healthier version tastes just about the same.

You can see the party in action in this video, where several other bloggers make loads of cool dishes. And then, if you are tempted enough, go make my mom's aloo paranthas. They are the best in the world.
http://www.youtube.com/watch?v=f8gyhXe47vA

Put the flour in a bowl. Make a well in the centre and add 1/4 cup water. Slowly bring the flour in and mix. Knead until you have a smooth pliable dough, adding more water if needed. Cover and set aside for 15-20 minutes.

Mash the potatoes. Add all the other ingredients for stuffing and mix well. Take a golf ball size portion of dough. Dredge in dry flour and roll out into a thick circle. Add about 2 tbsp. of potato filling in the middle and gather up the dough around the filling, sealing to make a ball stuffed with potatoes. Roll the dough in some dry whole wheat flour and roll out into as thin a circle as possible.

Place on a heated pan, let cook for a minute. Flip, apply a little ghee on each side and cook until golden brown and crisp. The paranthas are served with mango pickle and plain yogurt in my home.