December 31, 2008
What a difference a year makes. As I look back on 2008, there are so many firsts in my life and so many things I am thankful for. But no lists today.

Instead, on last day of this year, here's another first. I finally dared to make an Indian mithai. Yes, me! To ring out the year in style, here comes rasmalai - my last minute entry to Food in Color - White. 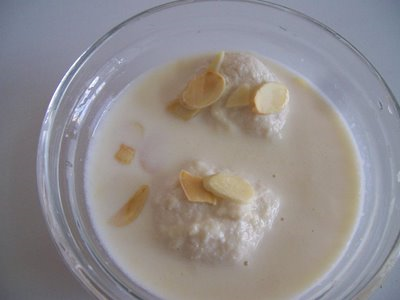 Rasmalai has two parts - the chenna balls and the rabdi/milk these balls are soaked in. To make the balls, heat 1/2 litre milk until it comes to a boil. Reduce the heat to a simmer. Add a tsp of lemon juice to the milk and stir until it curdles. Strain to separate the whey. Textbooks say to use a cheesecloth but I've never managed to do it without spilling everything or burning my hand so I just pass it through a large strainer and press down with a plate for the whey to drain away.

When the chenna has cooled a little, put it on a plate and knead for around 10 minutes. By this time, the grains would be gone and you will have a smooth mass. Add 1/2 tsp cornflour and knead some more to give you a smooth mixture. Divide in 6 parts and shape into round balls, then flatten them a bit.

Mix 2 cups water and 1/2 cup sugar and bring to a boil. Boil for around 5 minutes until the syrup gets a bit thick, then carefully drop in the chenna balls. Boil for around 10-15 minutes until the balls double in size. Pour half a cup of cold water and boil for another 5 minutes (no idea why - mom told me to do it this way). Remove from fire, and drop the balls into cold water.

In a separate pan, bring 1/2 litre milk to a boil. Reduce the heat and simmer, stirring every 2-3 minutes, until the milk reduces to half. Add 2 tbsp malai or cream and 2 tsbp sugar. Continue to simmer the milk for another 10 minutes until it is thick.

Squeeze the water from the chenna balls and arrange them in a bowl. Pour the hot thickened milk on top. Chill for at least a couple of hours. Your new year party's dessert is ready!

Anonymous said…
I have given up making rasgulla at home, after I discovered the canned ones.. shame on me:-(

CurryLeaf said…
Nice entry.I remember last time also your forbidden rice was the very last minute entry.Looking forward for more and more goodies from you in 2009
January 1, 2009 at 2:19 AM

lubnakarim06 said…
Yummylicious dessert. This is my all time favourite... Looks scrummy. Thank you for sending it down to FIC.
January 9, 2009 at 1:48 PM