Be careful what you wish for... For didn't I say last month that the daring bakers challenges were getting to be too simple. And just a few days later, Angela and Lorraine, this month's hosts, responded with a Dobos Torte. I haven't heard of this Hungarian torte before and I read the eight page pdf of the recipe with growing apprehension.

You'd know when I explain what a Dobos Torte is. It's a five layer sponge cake with chocolate buttercream, topped with caramel. Now I've never made a sponge cake before. I've made buttercream once but I wouldn't know how to apply it neatly on a cake. And caramel! Isn't it that scary thing that goes from just done to burnt in a second.

To make it easier, I decided to make a mini cake with just 1/6th the original recipe. That's where Audax comes in. You don't know Audax? He's got to be the most helpful daring baker. And because he usually completes the challenge the day it's announced, we rely on him to clarify techniques and occasional bugs in the recipes. I know I do.

So Audax came with this fabulous way to make even layers of sponge cake just as thick as a matchstick. I took his advice and baked a sheet of cake, then used my round cookie cutter to cut out five circles of thin cake. And a sixth smaller circle for the caramel layer. So far so good.

Making the buttercream was easy too. I am not a fan of lightly cooked eggs in buttercream, so I took Aparna's advice and replaced the eggs with a paste made of milk and corn starch. Lovely, shiny, silky cream. If only I could apply it in an even layer. That so didn't happen as you can see but it was delicious.

And finally, the caramel. To me, that was the bit that brought this cake together. A lot of members thought they found the caramel with lemon juice too lemony so I made one important change to the recipe. Instead of the lemon juice, I added 1/2 a tsp of lemon essence. Yes, it was hard to judge when it was done. But it didn't burn, and it was so delicious. Of course I got more than just that little disk that you see there, so I dropped chunks of it on a parchment that I then picked and ate. Just like that. It was like toffee, but better.

The final cake was too sweet for me, so maybe I'd make my buttercream with bitter chocolate if I do this a second time.

Before I sign-off, the mandatory blog checking lines:
The August 2009 Daring Bakers' challenge was hosted by Angela of A Spoonful of Sugar and Lorraine of Not Quite Nigella. They chose the spectacular Dobos Torte based on a recipe from Rick Rodgers' cookbook Kaffeehaus: Exquisite Desserts from the Classic Caffés of Vienna, Budapest, and Prague.

And a quick look at the half eaten cake, just before it all vanished. 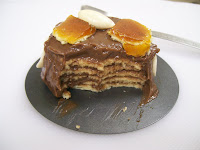 Aparna Balasubramanian said…
I think the "not smooth" look of the buttercream looks lovely on your cake.
And I would have made one just this size if I didn't have an occasion to make the big one for.
August 27, 2009 at 5:13 PM

Unknown said…
It certainly doesn't look like you had problems with this cake! Your layers look perfect! And the 'not smooth' look is very nice, it gives off a warm, homemade feeling!!
August 27, 2009 at 6:23 PM

Laura said…
I seem unable to omcplete any Daring Baker challenges any more. It's just terrible. but this is really lovely, I am impressed.
August 31, 2009 at 12:00 AM

Spice said…
Looks delicious....thinking about making some thing with caramel from last so many months yet not sure....may be now is the time....Like your blog get that nice feeling of punjab from your blog....miss punjab a lot.....yep i'm punjabi kuri too.....phir milde haan.
August 31, 2009 at 8:37 PM