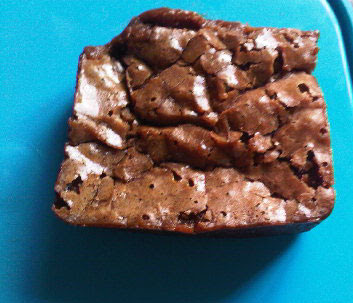 After baking some okay but not great brownies and then hitting a disaster with overly fudgy ones, I have been obsessed with finding a perfect brownie recipe. So I went searching all the usual suspects (aka dessert food blogs) and bookmarked some 20-odd recipes.

I'm trying to avoid chocolate here folks (or so my doctor thinks, ha!) so let's try all 20 recipes doesn't come up as an option. I noticed Two Spoons baking some brownies based on a Julia Child recipe and pronouncing them the best ever. And I thought, if it's Julia Child, it can't be all that bad. So I followed the recipe just as two spoons did, except I halved it.

First you half fill a saucepan with hot water. Add 110 grams butter and 90 grams chocolate to a mixing bowl and place it in the saucepan so it can slowly melt. At this stage, I opened my jar of caster sugar, found it almost empty and panicked. Then I told myself it was okay, the chocolate will take a long time melting and I could get myself some sugar in the interim. So I called the grocery store, made myself a cup of tea and settled for some reading.

Half an hour later, equipped with newly home delivered caster sugar, brownie making was on again and the oven was set to preheat at 175C. By this time, the butter and chocolate had melted but there were small chocolate chunks remaining. I popped the bowl in the microwave for 10 seconds and stirred everything to melt completely. To this, I added 1/2 cup of sugar and 1/2 tsp of vanilla essence.

While the chocolate cooled to room temperature, I cracked two eggs in a small bowl and added 1/2 cup of sugar. Whisked them until just combined, then added half of the egg mixture to the chocolate. The other half, I beat with a mixer until doubled in volume. I folded the beaten eggs into the chocolate and finally, sifted over 3/4 cup of flour and folded it in until just mixed.

I poured it into an 8X5 inch pan lined with parchment and baked for 25 minutes. Everyone warns against overbaking brownies, so what I was looking for was a dry top even while the batter still stuck to the tester and the whole pan was still a little wobbly. I know, it's hard for a cake baker like me to stop at this stage but Julia Child said so.

Just like my previous brownie disaster, these were very soft. Even when they had cooled to room temperature, I didn't dare cut them. Instead, I popped them in the freezer for half an hour to harden and they cut into squares easily. All the while retaining that essential fudgy feeling.

So call it third time lucky, but this is just the brownie I was looking for!

Aparna Balasubramanian said…
I have made quite a few brownies, cannot resist them. :)
Have more recipes bookmarked but think I need to cut down on the "buttah" for a while!
June 4, 2010 at 9:49 PM

Biswajit said…
how can it be over fudgy and also a disaster? that's an oxymoron.