October 31, 2008
Flash back to that time before deep freezers and shopping malls. Before broccoli, bell peppers and avocados became commonplace in Indian kitchens. When vegetables and fruits meant whatever was grown that season within a few hundred kilometers of wherever you lived. I divide that time by vegetables not seasons. I am pretty sure there was more variety, but after you ruled out the bottle gourds and pumpkins, summer for me was arbi and bhindi. Just like winter was sarson ka saag which I would steadfastly refuse to eat and so only options were matar and gobhi. That's what comes out of being picky when you are growing up.

But what also comes out of this limited range is more variety in how you cook these vegetables. Let's start with colcassia or arbi. There's fried arbi I wrote about a few months back. Then there's this commonplace arbi sabzi, close enough to fried arbi but not the same. And there's a third one...but that one later. Featured right now is arbi in it's second avatar. 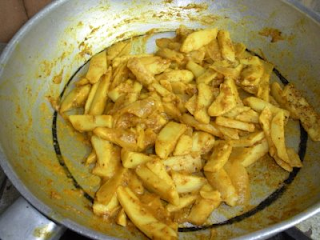 Peel 200 gms arbi and drop in cold water for some of the starch to wash away. Remove and cut into fingers. Also chop an onion lengthwise. Heat roughly a cup of oil in a pan (enough to deep fry) and let the temperature drop to a simmer. Drop the arbi and onions and cook on a low heat until the arbi is half cooked. Remove and drain as much oil as you can. Return to the pan with just the oil retained in arbi. Add 1/2 tsp each of salt, turmeric powder, chilli powder, a tsp of ajwain and 1/4 tsp amchur (dried mango powder). Add 1/3 cup water and simmer till the arbi is well done. Top with a sprinkle of garam masala.

Siri said…
interesting way to cook up our dear arbi, instead of deep frying Simra.. will try this soon..:) Happy Halloween!

Bharti said…
Arbi seems really popular in the blogsphere now days. This looks like a tasty version.
November 1, 2008 at 6:52 AM