November 30, 2008
It's hard to say if Alice in Wonderland is a very popular fairytale written by Lewis Carroll, or the biggest piece of literally nonsense ever written. What's easy to say is that the book has the power to mesmerize all readers, irrespective of their age. I've read it many times over the years, and I enjoyed it all over again as this month's pick for "This Book Makes Me Cook".

Funnily enough, I rarely remember Alice at first when I think of Alice in Wonderland. I always recall Cheshire cat's grin and mad hatter's tea party. And I think of the caterpillar on the mushroom. And the queen saying "Off with their head". It's bizarre, but unforgettably so.

It was the memory of the playing card gardeners painting the roses red, and the image of playing cards parading with the king and queen of hearts that prompted me to make my playing cards cake. 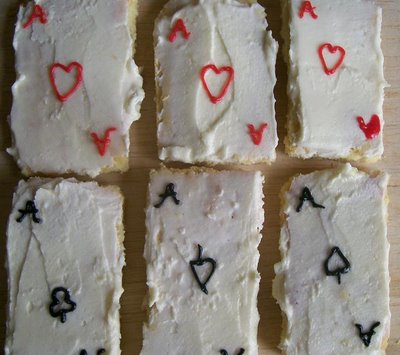 The base for the playing cards is the basic madeira cake. I set oven to preheat at 180C. Beat 120 gms butter and 120 gms caster sugar until it was fluffy. In a separate bowl, I broke two eggs and beat them lightly. Also mixed 160 gms flour with a tsp of baking powder. Then I beat in a tbsp of egg at a time, alternating with a tbsp of flour. Added the rest of the flour and mixed well to form the batter. Added a tsp of vanilla essense and then, I poured the whole mixture into a baking sheet lined with paper and baked for 30 minutes so ended up with a sheet cake.

Once the cake had cooled, I cut it into rectangles roughly the size of playing cards. Next, I made buttercream by creaming 50 gms butter with 100 gms icing sugar and adding a tbsp of warm milk and 1/2 tsp vanilla essence to bring it to a spreadable consistency. Spread the buttercream on the playing card slices, then piped in the numbers and heart/spades designs to make playing cards. It's my first time icing a cake, and it shows but at least it tasted great!

Here are the "Alice in Wonderland" recipes from other members of This Book Makes Me Cook:
Sunshinemom made Vegan Cheesecake Brownies complete with "Eat Me" tags
Aparna made Orange Marmalade Cake
Rachel made Sandwiches for Mad Hatter's Tea Party
Curry Leaf made Chocolate Pudding Cake
Siri made Veggie Finger Sandwiches

For December, We are reading Anne of Green Gables by Lucy Laud Montgomery. If you would like to come join us, leave a comment here and I will get back with more details.

Sunshinemom said…
Creative genius, Sim!! I love those playing cards that I can chomp on when I start losing:) Montgomery talks so much about food, I think I will be going crazy!! We should expect lots of variety there too!
November 30, 2008 at 12:51 PM

Unknown said…
Oh! I love it too. And I must have read it a hundred times.

For a first timer yur icing ain't too bad. You should have seen my first time. I coudn't control the squiggles!
November 30, 2008 at 6:38 PM

CurryLeaf said…
Cute and much inspired cake.I am very lazy to do such frosting.Love it Simran.
Thanks for the mail and happy to know you are safe.Still take care.
December 1, 2008 at 2:03 AM

FewMinute Wonders said…
Hey Simran, I liked your idea so simple and so cool. It did make me simle. Good job
December 5, 2008 at 9:21 AM