November 10, 2008
...you can't make great chhole. I am still a work in progress because mine never turn out half as good as mom's. This is her version. My contribution to the entire post was just standing there with a camera. 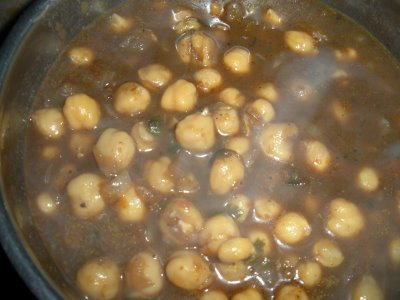 There are two ways to make chhole. The traditional way is to figure out the right proportion of some twenty odd spices, grind them, etc. The easy way is to buy chhole masala. To make Punjabi chhole the easy way, soak a cup of chickpeas overnight. Boil them in plenty of water until soft with 1/2 tsp of salt and a tea bag thrown in to give chickpeas a brown color. Throw away the teabag and drain the chickpeas but retain the water they were boiled in.

Chop one large onion finely. Also chop a 1 inch piece of ginger and a tbsp of coriander leaves. Puree two tomatoes. Heat 1 tbsp ghee in a pan. Saute onion and ginger until brown. Add tomato puree. Also add coriander now - we're using it for flavor not color in this recipe. Saute until the masala is very dry. Add 1/2 tsp salt and 2 tsp of chhole masala. Add the chickpeas and stir for a minute. Add enough water left over from boiling chickpeas to cover them entirely. Bring to a boil and simmer for at least 15-20 minutes for the flavors to sink in and gravy to thicken.

The chickpea curry is good enough to eat with paranthas, rice or poori. Bhathuras are obviously a great choice, so that's what mom made. For her recipe to make perfect bhaturas every time, stay tuned!

In the meantime, Punjabi Chhole go over to Simona for 5th helping of the Legume Affair

Bharti said…
Oh Simran..proper Punjabi chole is what I just luurve! And your mom made it? It must be lip smackingly yummy. Lucky u.
November 10, 2008 at 8:43 PM

CurryLeaf said…
Lovely chole.I enjoy chickpeas in many versions.This is traditional and is lovely with bature.
If interested send it to legume affair -5th helping at http://briciole.typepad.com
November 11, 2008 at 12:54 AM

Simona Carini said…
A very interesting idea that of using a tea bag when cooking chickpeas. Thanks for participating.
November 13, 2008 at 1:37 AM

Aparna Balasubramanian said…
Moms always know best and usually they cook the best too.
So are you Punjabi or on the way to becoming one? :)
I guess you were talking about the choel.
November 17, 2008 at 2:09 PM