November 14, 2008
When Sangeeth announced her Fight Diabetes event, I am sure she had in mind special foods for diabetics. I agree that special foods they have to be, with all the restrictions on what you can and can't eat. But having watched diabetes up close, I also know that anything that's too out of ordinary isn't going to cut any ice here. After all, diabetics have to follow a special diet the rest of their life. And if I grew up eating paranthas for breakfast, a fruit salad, no matter how nice, just isn't satisfying enough.

When I think of food for diabetes, I think of things like besan parantha. While I have no medical facts to prove this, family lore has always told me that chickpeas - the small brown variety - help combat diabetes. So does besan or chickpea flour made from these. And this parantha in a version where it isn't fried and has minimal fats is a breakfast that would make my father happy. Without making him feel guilty! 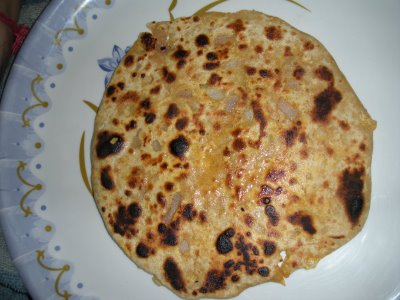 Take a lemon sized ball of wheat flour dough and roll out to a thick disc. Place a tbsp of chickpea paste in the center and gather up the rest of the disc to form a dough ball and seal in the paste. Roll out this ball as thinly as possible. Heat a gridle and place the rolled out parantha on it. Cook on a low heat until it starts to brown evenly. Flip and cook the other side. When the parantha is almost done, apply very little olive oil on one of sides, flip once to sizzle the oil and give the parantha a shine. The finished parantha will have a texture somewhere between a roti and a real fried parantha, and is delicious with low-fat yogurt.

Bharti said…
I've heard about the besan bit from my mom too. I like the besanatta combo for a paratha. And really, it is a whole grain breakfast, add the yogurt and it's got , calcium, protein, fiber,- covers all food groups. Parathas are simply brilliant.
November 14, 2008 at 10:03 PM

Sunshinemom said…
I will try this tomorrow for breakfast - who said only diabetics should fight the condition;)
November 14, 2008 at 11:33 PM

Srivalli said…
Looks good simran...and it takes everybody to collectively fight the condition!
November 15, 2008 at 6:47 AM

Aparna Balasubramanian said…
Besan is good for diabeetics. This is because of its low glycemic index and so it doesn't cause sudden sugar spurts in the blood.

Anonymous said…
nice post..ived been looking for news and articles about diabetes and sugar free recipes. We all know that it is a serious illness and your article really helped. thanks for sharing this one out.
December 3, 2008 at 9:40 AM