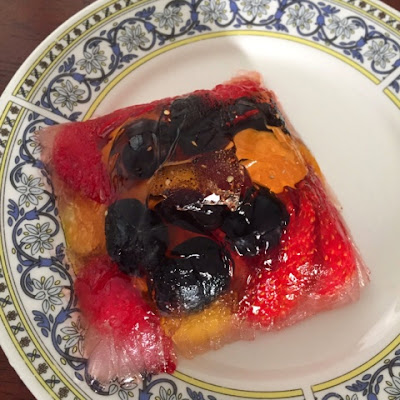 Now that Christmas is over, we are out of the season for hearty fruitcakes. Instead, the new year's eve calls for dainty canapes and elegant desserts. Which is why I am calling Jamie Oliver's elderflower jelly into action. Originally made as a summer dessert, this is festive enough to bring in the new year. I scaled down the recipe considerably to make only one bowl of dessert but look up Jamie's recipe if you are cooking a full batch.

This jelly is typically made with mixed berries but since we only get strawberries here, I added black grapes and bright orange cape gooseberries to the mix. Washed and halved enough fruit to fill 2/3 of a bowl (about the size of a standard cup). Next, I took one sheet of gelatin and soaked it in cold water. 5 minutes later, I lifted the gelatin sheet out of water and put it in a heavy bottom saucepan. Added 2 tbsp elderflower cordial and set the pan on very low heat, stirring constantly until the gelatin melted completely. Added 1/2 tbsp caster sugar to the mix and stirred until it blended in fully. I gave the mix 5-10 minutes to cool, then poured in 1 cup of club soda. Gave it a stir then poured it over the fruit bowl. Jamie uses prosecco and you can use any bubbly drink. If you are using club soda like me, make sure you open a fresh bottle or can. You want as many bubbles as possible to get trapped in the fruit as they will pop when you eat the set jelly later.

Cover the bowl with cling and let set in the fridge for at least 2-3 hours. Dip the bowl in hot water for a minute and invert on a plate.