December 08, 2014
I have always been a big fan of Christmas. Now remember that when I was growing up, Christmas did not even register as a festival on social calendars as it does now. There were no trees, no overly decorated shopping malls filled with Christmas music and certainly no gifts. But for our family, there was a difference. Up until high school, my family lived on the first floor of this two storey house. Our ground floor neighbours were Catholics and when you live in the same house for as long as we did, you practically think of them as family. As a kid, I wondered at the Chistmas tree when they invited us to visit and marvelled at the wreaths and holly and their traditions of midnight mass. And on Christmas day, I looked forward to cake. Every year, like clockwork, they would show up on the morning of 25th December with a plum cake. In 1990s Amritsar, this was both rare and fascinating.

I loved Christmas then and I've never stopped loving it since. I love the Christmas markets, even the ones that happen inside crowded shopping malls. And I watch every Christmas movie ever made. Some, like the Santa Clause or the Elf, I watch at least once a year. Ever since I got into baking, I also bring in that little bit of Christmas magic home with pies and cakes and cookies.

This year, I've decided to share Christmas magic with you with a 30 day Christmas recipe marathon. We start today, because then, the 30 days will end on January 6, the last of day of Christmas. And in the course of next month, there will be all the flavours that define Christmas for Bombay Foodie. So be on the lookout for ginger and cinnamon and mincemeat. But first, let's make some candied oranges. 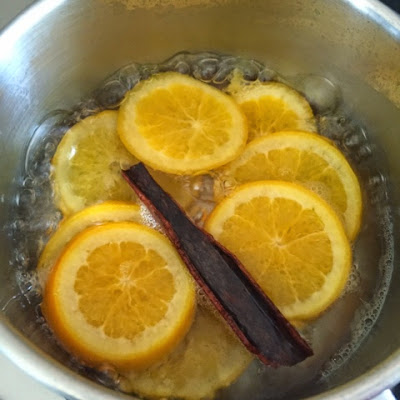 The recipe for these candied oranges comes from David Lebovitz. First off, wash an orange (I used this variety called Valencia) and lop off both edges. Slice the orange into round slices about 1 cm thick. Put the orange slices in a saucepan and cover with room temperature water. Bring to a boil, then reduce the heat and let boil slowly for 10 minutes. Drain, cover with fresh water, and repeat the whole 'boil for 10 minutes' process.

Drain and pop the slices back in the saucepan. This time around, add 3/4 cup water and 1/3 cup sugar (David used 1/2 cup sugar so use more if you like, I thought the lesser quantity was enough). Also add a cinnamon stick and if you want, some cloves or a couple of star anise. Bring to a boil, then reduce the heat and cook until most of the liquid evaporates and you are only left with a very thick syrup. Turn the oranges a few times while they are cooking so they get coated with sugar evenly. You might want to stir them a bit more towards the end of the cooking time so they don't burn. Once almost all the liquid is gone, take the oranges off the heat and tip them into a colander. Let cool, then store in an airtight jar in the fridge until you are ready to bake that fruit cake or mince pie.