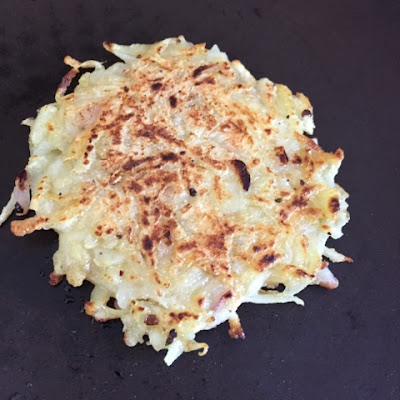 Among all the hoopla on Christmas, I want to take a minute to take about the other festival that comes around the same time - hanukkah. I honestly don't know much about Jewish culture but hanukkah first caught my attention when I spotted all the posts for potato pancakes called latkes.

Now I am a big fan of fried potato, be it fries or hasbrowns or the Indian aloo tikki. Which is why I've wanted to make latkes for a long time. I looked at a lot of recipes but I still had two concerns. One, most latke recipes use egg and I wanted something with no eggy taste. Two, have made the Indian potato cakes with boiled potatoes all my life, I wasn't sure if the raw potatoes will cook through. So I looked some more for vegan and eggless latke recipes. Everyone agreed that the potatoes will stick together even without eggs but some starch was recommended. So I adapted the recipe with some cornflour.

I made latkes with one medium sized potato and that gave me 4 cakes. So take one potato per person as the basis and scale up the recipe as you like. The first step is to grate the potatoes. I grated my lone potato on a box grater but food processor is a good idea if you are cooking for a crowd. Peel and chop a shallot finely (you are looking for a medium sized onion for 4 potatoes so I scaled down). Add to the potato. Either in a sieve or by tying the potatoes in a cheescloth, squeeze as much liquid out as you can. To the now dry potato-onion, add 1/2 tbsp cornflour, salt and pepper and mix well.

Heat a nonstick pan and add a tsp of oil. Scoop up a handful of the potato, shape into an approximate round and pop in the hot oil. Let the latke crisp on the bottom (about 3-4 minutes), then spread another tsp of oil on top of the pancake and flip. Press down with a spatula to flatter so you have a thinner and crisper latke. Cook the other side to a golden brown as well.