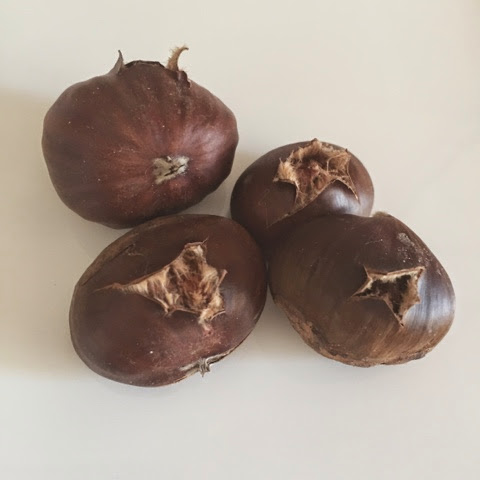 About an hour's train ride from London is a small town called Rochester. As far as I can tell, there isn't much that happens out there throughout the year. Except for this one weekend in December when they host a Victorian Christmas parade. On my train from London to Rochester, I could already see folks dressed as Dickens characters. The whole town gets into the party mode right from puppet shows in the library to fake snow coming down the only high street in town.

Of course, the reality also includes too many people showing up in a sleepy town, leading to overbooked restaurants and crowds all round. So while the day itself turned out to be the mixed experience, what I clearly remember is the roast chestnuts. Holding the warm bag is hugely comforting as fake snow and real winds pelt you, while waiting for the Victorian parade to start.

Then last week, I spotted chestnuts on bigbasket.com and instantly added them to my grocery order. The next day, I set about the task of preparing the chestnuts. Since I don't have a barbeque, roasting the chestnuts was out. Instead, I tried both other methods available to the home cook. But whatever cooking method, the first step is to wash the chestnuts and score them. Take a sharp knife and cut an X on the chestnut. This is to stop the nut from exploding with steam later.

For the first method, heat the oven to 200C. Spread the chestnuts on a baking try and let cook for 20 minutes, until the skin has softened. Let cool a little and as soon as you are able to handle them, peel off the hard outer skin as well as the inner skin (which can be a little difficult to remove once the chestnuts are cold). The oven roasted chestnuts are ideal if you have a fresh batch. However, my bigbasket chestnuts seemed a little dated and so I found it much better to boil the other half instead. Prepare them the same way as the first time but this time, pop them in boiling water and let cook on a simmer for 10-15 minutes.