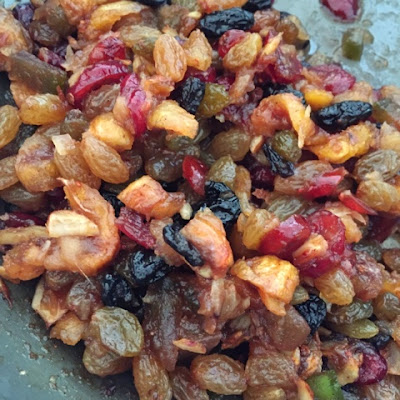 For the longest time, I thought mince pies must be savoury pies filled with some kind of meat. Then, when I was living in London, my British flatmate explained that mincemeat referred to a rich, sweet mix of apples and dried fruits, with suet being the 'meat' in the recipe. She immediately added that mince pies are stodgy and too sweet and most people don't like them. But living in London anytime from mid-November, you can't really avoid mince pies. From my college cafetaria to grocery stores to coffee shops, mince pies take over London during Christmas even more than eggnog and christmas cakes.

My first mince pie was somewhat unconventional. Heston Bluementhal does a range of goodies for Waitrose every year and that year, Heston did a mince pie in puff pastry, not the standard pie crust. Alongside the pies came a sachet of pine sugar, that made my house smell like forest and snow and Christmas trees. Much to my British friends' surprise, I loved not just the Heston pie but most other mince pies. I also use jars of mincemeat in cookies and other random desserts. So while we are building up to our Christmas desserts, I thought we should first make mincemeat.

The recipe for the mince comes from British baking icon Mary Berry. It's quite simple too. All you need to do is collect a bunch of things, pop them in a pan and cook for 10 minutes. So first off, start measuring off your ingredients. The easiest way to do this will be to put a big saucepan on your weighing scale and keep resetting to zero every time you add something new. You would need:

(a) 150 grams of raisins, sultanas and currants. You can use only one type or all three or a mix.
(b) 50 grams of dried cranberries
(c) 50 grams of chopped dried apricots
(d) 25 grams of citrus peel. You can use orange or mixed peel. I spotted this vibrant green pomelo peel in a store yesterday so that's what I used.
(e) 15 grams almonds, chopped
(f) 1 apple, peeled, cored and chopped into small pieces
(g) 30 grams butter
(h) 30 grams brown sugar (Mary uses more but I thought everything else was too sweet anyway)
(i) Spices of your choice. I used 1/4 tsp each of ground cinnamon, ground cloves and grated nutmeg.
(j) Juice of a lime

Once you have everything in the pan, that's pretty much it. Put the pan on a low heat, stir occasionally until the butter and sugar are all melted and the apples have cooked through, so maybe 10-15 minutes. Let cool, then stir in 50 ml of brandy or rum. I've packed this in an airtight jar and put it in the fridge where it should last for at least a month.