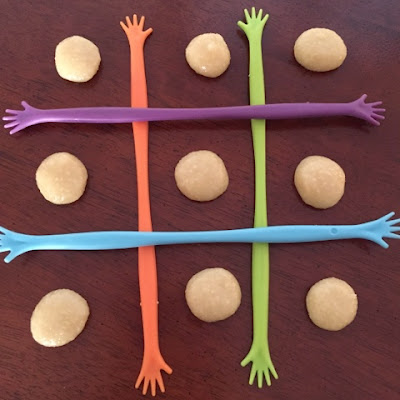 Of the Goan Christmas sweets I spoke about the other day, the one that intrigued me the most was milk cream. It was also the easiest to make so here is my own take on it. Milk cream is a fudge made with milk, sugar and cashews. A simple recipe, though it does require a bit of work.

First off, grind 50 grams cashewnuts to a rough powder and keep it aside. Make sure you don't over process them in the grinder and they would release oil and turn into cashew butter which we don't want. Now get hold of a heavy duty saucepan and pour 1/2 litre of milk in it. Bring to a boil, then reduce the heat to a simmer and let the milk cook until halved in quantity. Add 3/4 cup sugar and stir until it's all mixed in. Bring the milk to a boil again, reduce the heat and cook until the milk and sugar syrup is thickened to a condensed milk kind of consistency. Add the cashews and a tbsp of butter, then cook on a medium heat, stirring constantly to avoid the fudge burning. Test every few minutes by dropping a tiny amount of fudge in a bowl of water. At first, it will simply disintegrate but over time you will get a soft ball. At this point, the fudge is ready.

Remove the fudge to a plate and let it cool. Now the standard process it to press the fudge into marzipan moulds but I didn't have any so instead, I poured the fudge into a bowl, let it cool completely and then pinched out about a tsp at a time to roll into tiny truffles. The 'milk cream' is somewhere between a condensed milk and cashew barfi in flavour. I used less sugar than most recipes call for but still thought it was too sweet so next time I might reduce it to even less - say 1/2 cup of sugar.